Cardiac Scare in the Caribbean 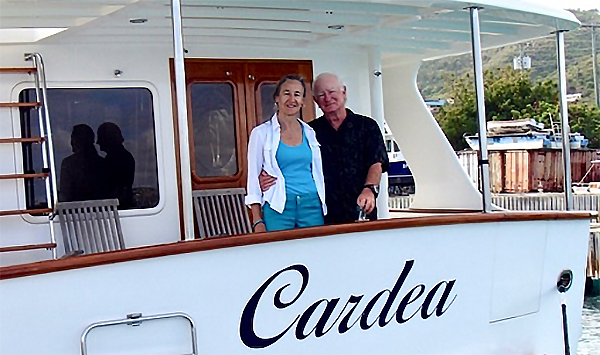 Marilyn Sharpe and her husband Kent Wall are self-described “boat people.” With homes in both Indianapolis and Los Angeles, the couple spends several months each year cruising in remote islands of the Caribbean sea on their motor vessel, a 56-foot trawler.

When considering the amount of time they spend at sea each year and a few other factors, they decided to look for companies that provide emergency air ambulance services, specifically to boaters – just in case.

“We were thrilled to discover Global Rescue, which provides both rescue and evacuation services, as well as air ambulance transport back to the United States if more specialized services are needed,” Marilyn said.

Fast forward to a few months to April.

Aboard their motor vessel, CARDEA, Marilyn and Kent were anchored off the coast of the island of Curacao, close to Venezuela.

“My husband awoke that morning with mild upper back pain, extreme fatigue and mild burning in his chest,” Marilyn recalled. “We were immediately concerned as these symptoms were similar to what he experienced 22 years ago when he suffered a major heart attack, so we were vigilant.”

“As kind as they were, all with whom I spoke to could not give me information about the kind of cardiac emergency services that were available on the island,” Marilyn said.

“As soon as I reached Global Rescue, I knew we were in excellent hands and we had made a solid choice in subscribing to their services,” Marilyn said.

The Global Rescue nurse who took Marilyn’s call immediately walked her through a history and diagnostic session with her husband Kent and made recommendations for prophylactic treatment for myocardial infarction symptoms.

The nurse also explained that she would investigate resources on Curacao and follow up with Marilyn.

“Within 10 minutes, the Global Rescue nurse called back,” Marilyn said. “She had identified the cardiologist on call at the hospital, determined the extent of cardiac services they could provide and informed me that the physician was standing by prepared to receive an emergency call from us at any time.”

“We were overwhelmingly relieved and thrilled to have such support, knowledge and contact information available to us,” Marilyn said. “The Global Rescue nurse called back a few hours later to check on Kent.”

By the time Global Rescue followed up, Kent’s pain had subsided and the two felt further emergency care was not needed.

“Nonetheless, the next morning we got another follow up call from Global Rescue to check on us and ask if we needed any additional assistance,” Marilyn recalled. “So it turned out to be an urgent, but not an emergent issue. However, when you have cardiovascular disease and have had heart attacks, you can never feel sure about the symptoms.”

Marilyn and Kent immediately booked flights back to the United States, where Kent was able to receive care from his home cardiologist.

“What was most stunningly reassuring to us was the competence and attentiveness of the staff at Global Rescue,” Marilyn said. “We had no idea that we would have access to immediate medical expertise a phone call away. We had no idea that [Global Rescue] would have the know-how to research and obtain critical information about local resources and give us the cell phone number of someone whom we later learned is the most respected cardiologist in the Dutch Caribbean. Nor did we expect to have such attentive follow up, including from staff on later shifts.”

The couple intends to continue exploring the islands of the Caribbean and have already started planning a trip to the remote San Blas islands of the Guna Yala Nation off the coast of Panama.

While their children have always been reluctant at the idea of Marilyn and Kent traveling there because of the lack of any emergency services in the area, it’s no longer something they have to consider.

“We want to live our dream,” Marilyn said. “With the knowledge that we have Global Rescue available to us if we get in trouble, we have had a burden lifted and we will pursue our dreams with much greater confidence and with kids who are greatly reassured.”