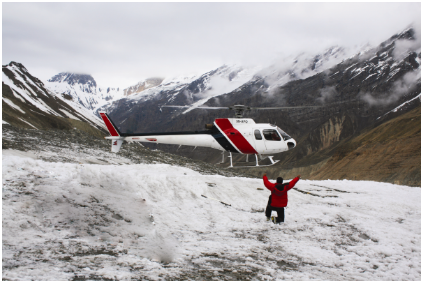 It has been a busy summiting season for Global Rescue members in the Himalayas, and consequently for our medical and rescue teams.  Our operations center has fielded numerous calls from Nepal, China and Bhutan since April, and performed about a dozen operations in the region in the month of May alone. Here are a few of these members’ stories.

The expedition leader of a group at Everest base camp called Global Rescue to report that a 37-year-old climber in his care had collapsed and was unable to walk.

Two days prior, the man had climbed from Camp 3 to Camp 4 of the world’s tallest peak without supplemental oxygen, and had no health complaints at the time. The next day was a rest day, followed by a successful bid for the summit. During the descent, however, he complained of chest pains and dizziness. His speech was slurred. These signs and symptoms worsened during the descent to Camp 4 and he began to cough up fluid. Ultimately he required the assistance of four Sherpas and a sled to transport him down to Camp 2. The expedition leader then called Global Rescue for help.

The company’s doctors suspected High Altitude Pulmonary Edema (HAPE) and recommended an evacuation from the mountain immediately. Global Rescue dispatched a helicopter, and the member was flown to a clinic in Kathmandu where he was diagnosed with both pulmonary and cerebral edema. Further, he developed a respiratory infection and had suffered damage to his kidneys.

Over the course of a week, he was treated at the clinic and closely monitored.  When he had made sufficient improvement, he was cleared to fly home on a commercial flight. He is currently at home in Colorado and is expected to make a full recovery.

One of the world’s top-ranked female climbers was at Camp 4 on Kangchenjunga, the third tallest mountain in the world, where she was suffering from snow blindness and a knee injury suffered in fall. She could not descend.

After she called the Global Rescue Operations Center for help from a satellite phone, Global Rescue dispatched a helicopter to reach her at 24,500 feet – very near the altitude limit for rotary-wing aircraft. She was transported to a clinic in Kathmandu, where she was diagnosed with torn ligaments in her knee and corneal burn in her left eye.

The attending physician recommended she undergo immediate surgery on her knee, but after conferring with the Global Rescue doctors and Johns Hopkins specialists reviewing her case, the climber elected to have the procedure performed at home in the United States.

A 65-year-old woman on a tour through various countries in the Himalayas began to experience dizziness, shortness of breath and mild chest pains when her group arrived in Bhutan, at an altitude of approximately 8,000 feet. The symptoms worsened when she arrived at Lhasa, at a higher elevation, and tour leaders called Global Rescue. The member explained that she had experienced these chest pains frequently before her trip, and that her doctors at home performed a stress test and the results were negative. She apologized that there may be no real need for concern, but wanted to confer with Global Rescue’s doctors to alleviate worries she may be experiencing a cardiac incident.

In conjunction with the tour operator’s attending physician, Global Rescue doctors and Johns Hopkins specialists advised her to avoid any physical exertion, remain on supplemental oxygen in her hotel room, and the company helped arrange a commercial flight to bring her to Kathmandu ahead of schedule for evaluation at a trusted clinic.

When she arrived at the lower elevation the symptoms gradually disappeared. Physicians at the clinic in Kathmandu found no cardiac complications and cleared her for her flight home.