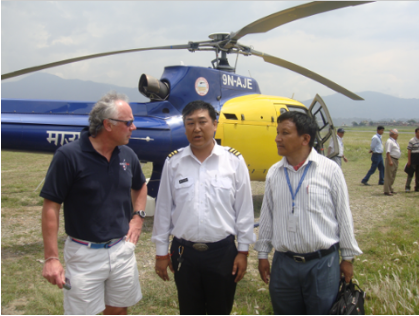 As another Himalayan climbing season begins in earnest, Global Rescue has information to help members deal with altitude sickness. Global Rescue Associate Medical Director Eric Johnson, MD, has been practicing high altitude medicine for decades, is one of the founders of Everest ER (the medical clinic at Everest base camp), and is an expert in treating altitude-related illnesses. Dr. Johnson offers advice on how to recognize, treat and avoid altitude sickness.

What Is Altitude Sickness?

Altitude sickness is best defined as a series of symptoms that occur during travel at high elevation. It can affect anyone who travels at altitude, regardless of age, fitness level, gender or ethnicity. If you’ve had it before, you may be more prone to recurrence. Symptoms are generally diagnosed in three broad categories:

AMS is the most common and least dangerous type of altitude sickness. The symptoms mirror those of a bad hangover and typically start at 8,000 feet in elevation. Symptoms usually start within a day or two of traveling to a new elevation and can include:

HACE is less common than AMS but much more serious. With HACE, the brain swells significantly, causing a loss of coordination both mentally and physically. HACE is especially dangerous to those climbing or mountaineering where the inability to ambulate (i.e., climb) can cost one’s life. These symptoms appear along with typical AMS indicators. The following symptoms of HACE typically start after one to three days at altitude:

HAPE is also less common but more dangerous than AMS. HAPE occurs when fluid accumulates in the lungs and usually starts after two to four days at elevation. The symptoms of HAPE are:

If climbers begin to experience symptoms from HACE or HAPE, they should descend immediately and NOT continue to ascend on their trek or climb.

In an emergency, some mountain clinics may use oxygen (“the” drug at altitude) and/or a Gamow bag, a portable hyperbaric chamber that can increase the atmospheric pressure inside of it.

Physicians may also prescribe medicines such as Acetazolamide (brand name Diamox) and Dexamethasone (brand name Decadron) to prevent and treat altitude sickness. If the issue is serious enough to warrant the use of these medicines, you should immediately descend.

The best way to prevent altitude sickness is to add a day or two into your trip to let yourself acclimatize to the new elevation. Even if these days aren’t specifically scheduled, give yourself an extra floating day in case someone does come down with AMS and needs time to adjust.

It is also a good idea to stay in top shape while climbing or trekking. If you are traveling to a high elevation area, speak with your doctor about proper preparation.

Eric Johnson, MD, joined Global Rescue as an Associate Medical Director in 2009.  He is an expert in wilderness and altitude medicine and is a past President of the Wilderness Medical Society where he has served on the Board of Directors since 2006. Dr. Johnson also serves on the Board of Directors of the Himalaya Rescue Association and is a founding physician at Mt. Everest ER, the medical clinic located at Mt. Everest Basecamp.  Dr. Johnson is a graduate of the University of Minnesota and the University of Minnesota Medical School.