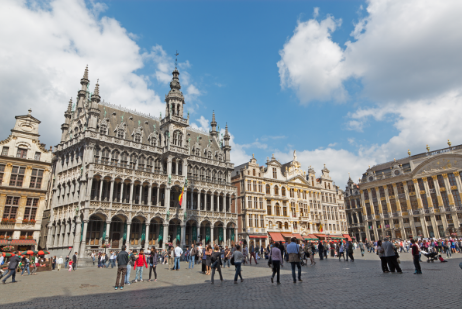 Authorities have indicated at least one Kalashnikov assault rifle was discovered next to the body of a suspected attacker at BRU although it remains unclear if the firearm was used in the attack. Additionally, an unexploded suicide vest was found at BRU, indicating a third possible suicide bomber may have fled the scene. A news agency affiliated with the Islamic State (IS) has said the terror group was behind the attacks.

Following the attacks, Belgian authorities raised the Belgium terror threat to a Level 4—the highest level on a four point scale indicating a “serious and imminent attack”—with an emphasis on transport hubs, airports, stations, and nuclear plants. The Prime Minister has urged all residents to “avoid all movement” due to the potential for further explosions. The US Embassy in Brussels recommends all US citizens in the capital to shelter in place and avoid all public transportation until further notice. 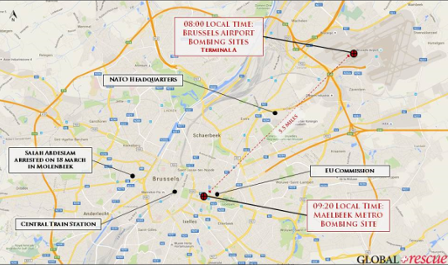 This attack comes just four days after police captured Salah Abdeslam, a suspect in the Paris terrorist attacks in November 2015, in the Molenbeek area of Brussels. There is speculation that these latest attacks in Brussels may be in retaliation for his capture, though this remains unconfirmed. The Prime Minister of Belgium has said there is no information that links these attacks to the arrest last week. Some reporting has also suggested that two accomplices to the Paris attacks, who were still on the run after Abdeslam was arrested on 18 March, may become the focus of the investigation for these latest attacks. They may have wanted to conduct more attacks as soon as possible fearing that Abdelslam would provide information to the police as to their whereabouts. These reports, however, remain unconfirmed.

Brussels has become a focus recently of counterterrorism investigations, especially in the wake of the November 2015 Paris attacks. Immediately after the November 2015 attacks in Paris, Belgian authorities had also put Brussels on its highest terrorism threat level, indicating a “serious and imminent” threat of an attack, after it emerged that some of the Paris attackers had lived in the country and that Abdelslam, a suspect in the attacks, was at large and likely in Belgium. Belgian authorities subsequently reduced the threat level in Brussels following a week of being essentially locked down. Similarly, Global Rescue raised the Security Risk Rating for Belgium to coincide with the raised threat level in the country, which was unprecedented at the time, and subsequently lowered it when the Belgian authorities lowered it.

Details regarding the latest attacks in Brussels will continue to emerge in the coming days and weeks, and it is likely some of the information available now will change. Continue to monitor our website and local media for updated information.

Travelers in Brussels are advised to shelter in place and stay out of public areas until the situation becomes stable. All train and air travel has been suspended, the city is in a state of lockdown, and follow-on attacks or raids by police cannot be ruled out. Ensure there is enough food and water available for 72 hours and continue to monitor local and government agency reports regarding the situation. While sheltering in place, it is always advisable to stay occupied with movies, games or other types of entertainment to lessen the psychological effects that accompany these events. Over indulgence in alcohol is discouraged, because it will hinder one’s ability to react if necessary and will cause excessive worry if family, friends, or colleagues cannot establish contact.

During times of crisis, good communication and accountability of travelers in the area will greatly reduce stress and trauma for family, friends, or colleagues back home. Cellular services can quickly become overwhelmed, as was seen in Brussels directly following the attack, so travelers should establish alternate means of communication; these include email, internet messaging apps and social media. Scheduled check in times can be established as well.

Once it is safe to freely move about the city, travelers should remain vigilant and avoid areas where large groups of people congregate, such as shopping areas, busy cafes and tourist attractions.  Expect an increase in security measures around the city, especially at major transportation hubs, so plan travel times accordingly. Utilize a taxi or hired car and avoid the local Metro if possible. While at the airport or train station, try to limit time outside of security by arriving early, performing early check-in, and avoiding “rush hour.”

Lastly, if travelers should find themselves in a dangerous situation, remember to move away from the area as quickly and safely as possible. Follow all instructions from emergency personnel, and do not attempt to return to the scene to help. Remember that your life is not worth recovering luggage or capturing a cellphone video.

If you are currently traveling in Brussels or have questions about upcoming travel, contact Global Rescue Security Operations at 617-459-4200 or operations@globalrescue.com.