A Heli-Skiing Accident in Canada 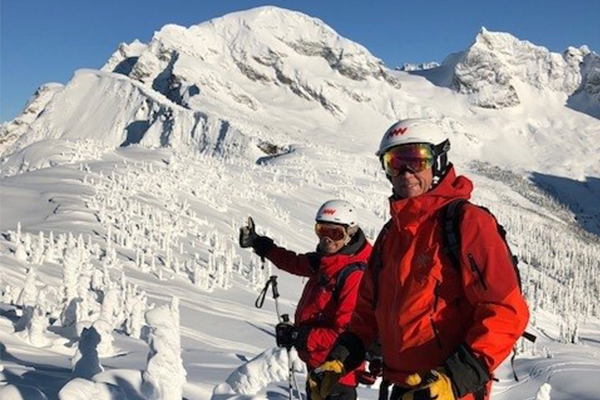 In an average year the Canadian Ski Council estimates approximately 2.5 million skiers and snowboarders hit its vast terrain, visiting well-known ski areas and even seeking out the country’s most remote locations for more extreme adventures.

An avid skier, angler and world traveler, Jorgensen had skied in Blue River for years, carving more than a few million vertical feet through the untouched cascading powder in British Columbia’s interior.

Whether fishing somewhere in the Indian Ocean or heli skiing with his family in Canada, Jorgensen has always traveled with a Global Rescue membership – just in case.

On one particular run with his son in Blue River, a mistake inadvertently sent Jorgensen airborne before he crashed into a large tree.

“I broke my ankle, both my femurs, my shoulder and my right hip got totally crushed,” Jorgensen said. “This was as broken as a person could be.”

Among safety risks and concerns, trees, unmarked cliffs and crevasses are all common hazards when heli skiing in Canada.

“We got Global Rescue on board because I realized I wasn’t going to be riding normal transportation back to Colorado no matter what the outcome,” Jorgensen said.

Upon receiving the call from the mountain, Global Rescue’s medical operations personnel gathered details regarding Jorgensen’s condition before dispatching a medical evacuation aircraft for transport.

The severity of Jorgensen’s injuries meant multiple surgeries would be required.

“Global Rescue originally wanted me to go to a Level 1 trauma center in Denver, but I know the doctors in Boulder and felt I’d be more comfortable there,” Jorgensen said. “Global Rescue told me that their doctors were reviewing the facility I wanted to check into – being very proactive in addition to providing transport.”

By 1 a.m. local time, Global Rescue informed Jorgensen’s son he’d be in a bed at the Boulder hospital by the next evening at 10 p.m.

“… and at 10:20 the following evening I was in a bed in the Boulder hospital, so there’s something to be said for that,” Jorgensen said.

After transporting Jorgensen more than 1,300 miles, Global Rescue continued to follow his case, ensuring he was receiving the best possible care back in Colorado.

While Jorgensen’s accident was not his first, it was without a doubt his most severe.

“It’s really hard to break both your legs, your ankle and shoulder all at once,” Jorgensen said. “I consider myself quite lucky that it didn’t kill me.”

In the months following the crash, Jorgensen underwent a hip replacement, shoulder surgery and had to schedule ankle surgery.

Although the accident derailed a few planned trips, Jorgensen was hoping to be well enough for two Alaskan expeditions on the horizon.

With a seamless experience at a critical moment, for Jorgensen, Global Rescue is an easy decision because, “when you need it, you really need it.”

“I’ve been a Global Rescue member for a long time because I travel to remote parts of the world,” Jorgensen said. “The value for the dollar is well worth it, especially when you’re in the backcountry.”

Whether you’re headed to British Columbia or looking forward to an Alaskan expedition, Global Rescue’s memberships have a wide variety of benefits for all types of adventures. Contact us to learn more at +1 617.459.4200 or email us at memberservices@globalrescue.com.