The Winners of the Global Rescue 2021 Photo Contest 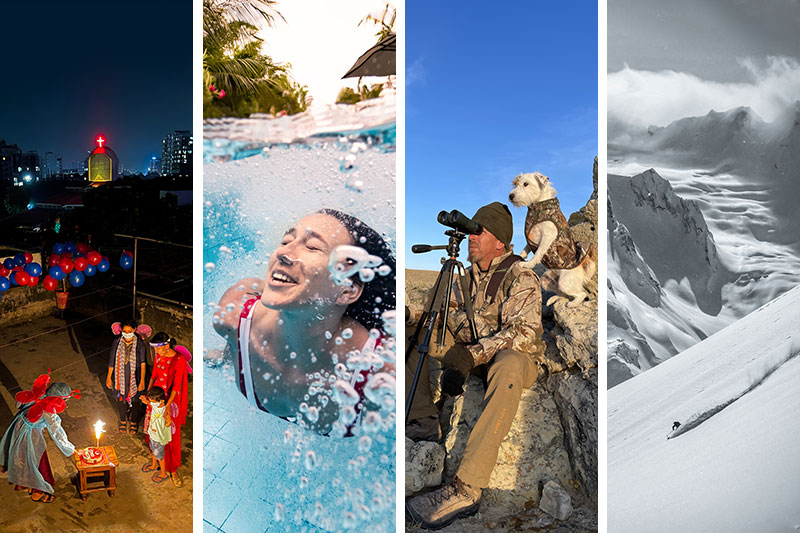 It’s one thing to snap a picture. But it takes true talent to capture a moment in time that conveys a wordless message of resilience, stirring deep emotional feelings or triggering mindful thoughtfulness about the world we share.

“I didn’t realize how hard this would be,” admitted Lydia Schrandt, a regular photo contributor to USA TODAY and part of our panel of pro photographer judges as she was reviewing the more than 400 submitted images during the Global Rescue 2021 Photo Contest. “There were images I found myself returning to again and again — ones that felt like a warm hug, others that made me want to know more about a place. Some even made me feel movement and the adrenaline of an adventure.”

She’s right. All the entries were outstanding — a testament to traveler tenacity during this unprecedented time. Still, some images burned indelible imprints on the judges’ brains. We think they’ll make an impression on you, too.

“Children are facing a difficult time in the pandemic,” said Chowdhury, a documentarian and street photographer based in Bangladesh’s capital city of Dhaka. “To make their days a little more colorful, celebration is still necessary to lift spirits and give them hope for a brighter tomorrow.”

In this photograph, taken in Tejgaon, the central district of Dhaka, he captured the very essence of that through the birthday celebration of a 12-year-old girl who had just beaten her own personal battle with coronavirus. “It’s an experience of rebirth as she has returned from death’s door,” said Chowdhury whose images have appeared in The Guardian, The Daily Sun, The Times of India, and more.

“A beautiful moment of togetherness in these hard times. This image moves me.” —Paul Shoul

“This image is so evocative of time and place. It tells a beautiful story of a family coming together to celebrate during difficult times.” —Lydia Schrandt 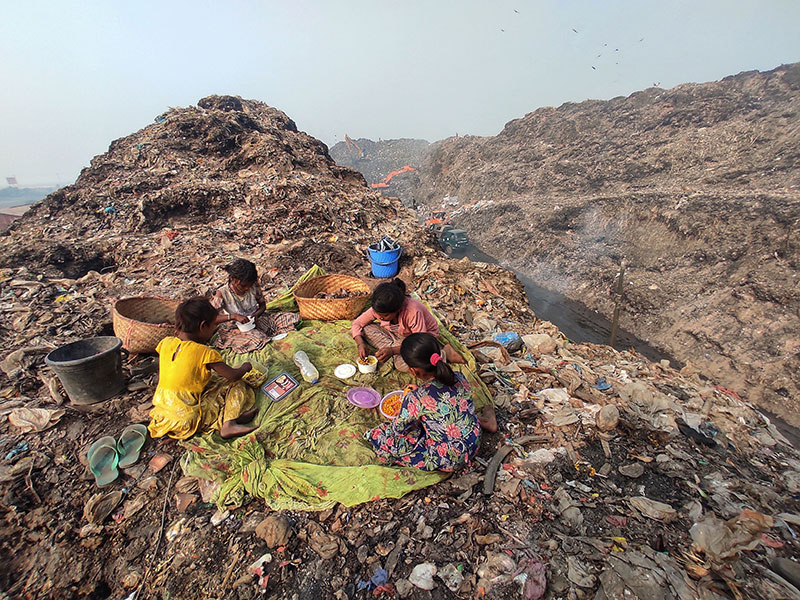 A group of children break for lunch in the Anadabazar dump yard — the largest dumping station of Chittagong, Bangladesh — where they work with hundreds of other children, pawing through the landfill to collect scrap metals, plastic and other recyclables.

“They are friends,” explained Hossain, a freelance photographer from Chittagong. “They eat together, and they share food with each other, and that’s a good example of humanity or human love. They still find joy in the midst of so much tribulation.”

“The way this group of children have created a haven for themselves to enjoy a moment of rest sits in such stark contrast to the muted landfill that fills the frame around them. It’s equally beautiful and heartbreaking.” —Chelsea Bakos-Kallgren 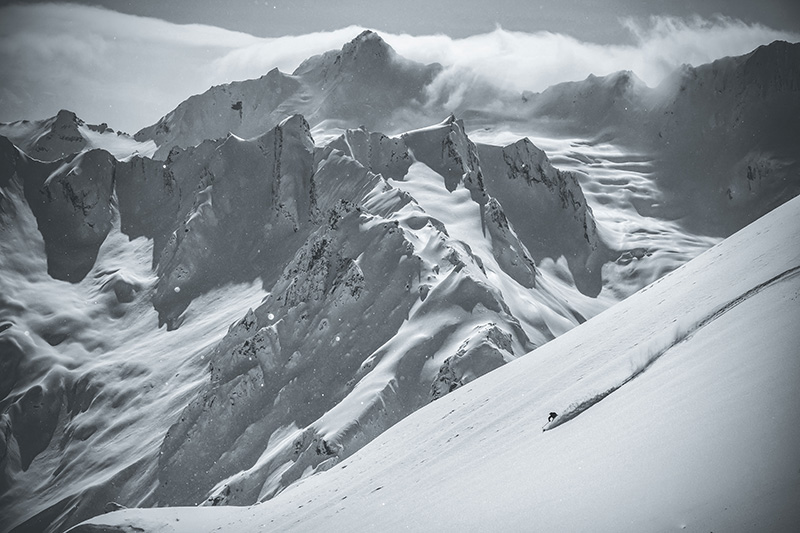 While Evans had to sacrifice a run to capture this shot of his buddy, pro skier Ricky Ceccant, during an April 2021 heli-ski trip to Haines, Alaska, he said it was more than worth it.

“It was my first Alaska heli-skiing trip,” said the L.A. local, a former pro snowboarder who now runs a boutique digital marketing agency and picked up the hobby of photography during the 2021 pandemic lockdown. “I was excited to not just ride this huge Alaskan terrain but to also capture the majesty of the mountains. Riding in such grandiose terrain is a humbling reminder of how powerful and beautiful the mountains are.”

“This is a great example of using a person for scale in showing off the humbling majesty of nature.” —Mark Edward Harris

“This photo has an incredible peaceful cinematic quality to it.” —Chelsea Bakos-Kallgren 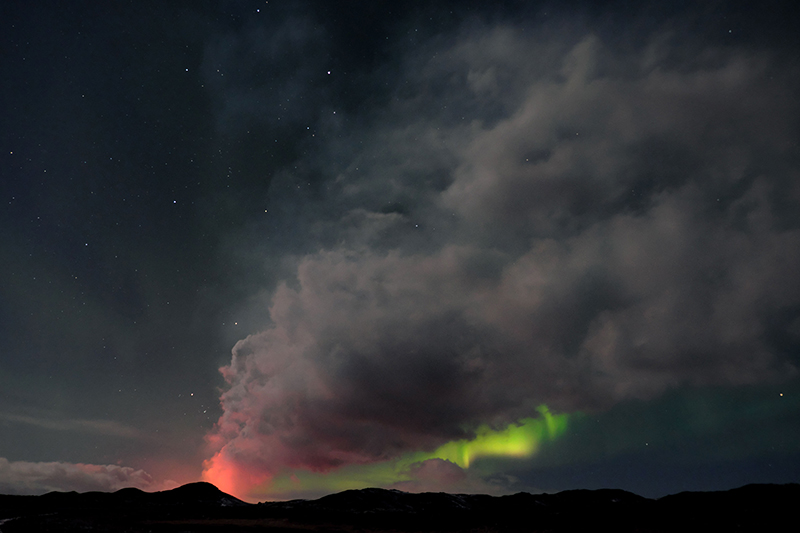 The full moon rising, the clear sky against the bloom emanating from the warm orange glow of magma, the green of the Northern Lights — everything aligned just right for this photo taken five days after the volcanic eruption began at Fagradalsfjall in Southwest Iceland in March 2021.

“The Northern Lights kept moving above and around the volcano, undulating as if somehow interacting with it,” said Ambermoon, who spent two hours capturing the spectacle of the lava fields that, at the time, was otherwise silent, except for the ambient call of arctic foxes. “In a time of disconnect during the COVID-19 pandemic, this eruption instigated a much-needed connection — not only with other humans trekking to the volcano but also with the earth itself.”

“Photographing stars, the Northern Lights or volcanoes is no easy feat. Yet this lovely skyscape manages to capture all three with impressive clarity.” —Lydia Schrandt 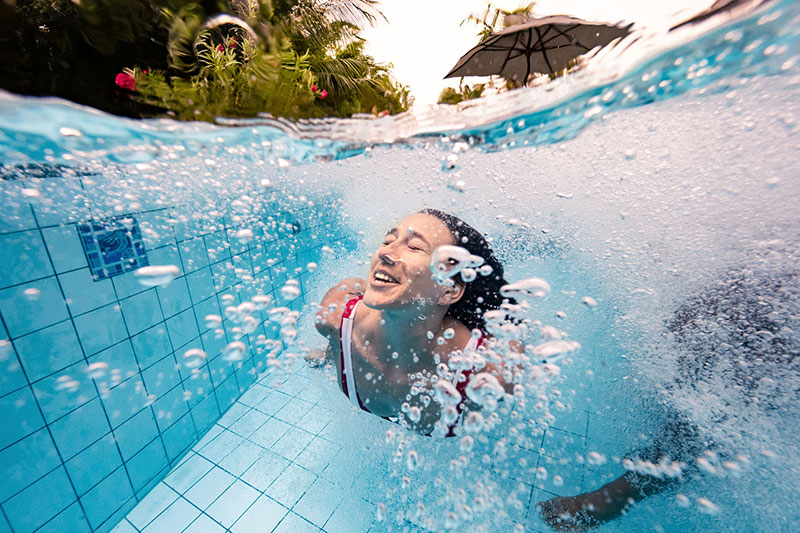 This shot was taken during an editorial assignment to Jericoacoara, Brazil, that Khalsa — a commercial photographer — was documenting on behalf of Windsurfing Now magazine. “Jericoacoara is a watersport oasis in a remote part of the country,” said the Oregon native, who grew up snowboarding, windsurfing, surfing and fell in love with photography in high school. “To reach it, you drive onto the beach and head west for an hour along the coast with nothing but sand in sight, but you have to time it according to the tides, so you don’t get stuck. The city emerges when you cross a final set of dunes.”

Depicting a submerged Greta Marchegger, one of the Italian windsurfers that he was following during the assignment, Khalsa captured the image at a beach resort pool while the athletes waited for the wind to come up one morning. “It was a dream,” he said. “Great conditions, food and company.”

“Khalsa really makes you feel like you’re part of the moment. When I look at this photo, I can almost feel the bubbles against my skin and hear the water rushing past my ears.” —Chelsea Bakos-Kallgren

“It was tough to choose between all of Khalsa’s images. They are all great, but the expression of joy in the swimmer’s face won me over.” —Paul Shoul 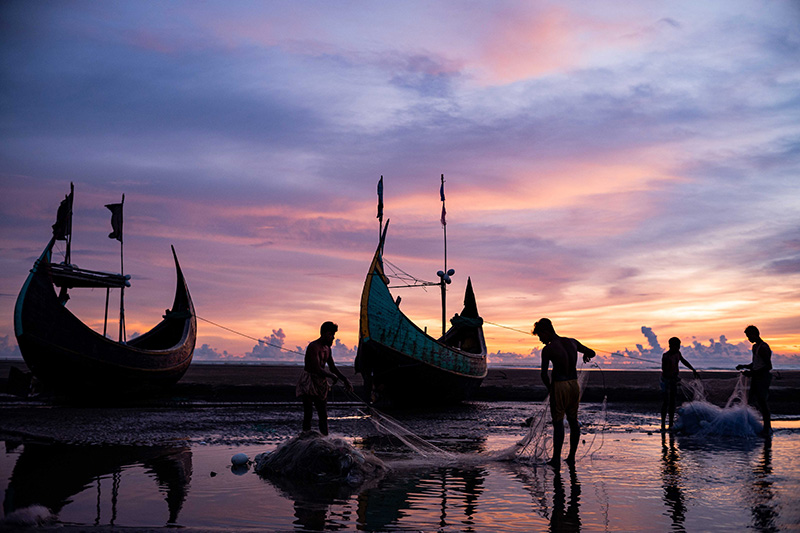 Sampan boats — flat-bottomed wooden boats with a triangular mast — are as much an iconic symbol in Chittagong, Bangladesh as the port city’s shrines and Mezban (a regional feast).

“These local boatmen often travel in the darkness of the night, and stay in deep waters for days to catch fish which they bring back and sell to the local sellers,” said Ata Mohammad Adnan, who is a doctor by profession, but a street photographer out of passion (he spends 12 to 15 hours a week photographing the city scenes of his home country of Bangladesh). “You will find them preparing their nets during the evening hours as the sun sets.”

“The color and silhouette lend a dream-like quality to this shot.” —Lydia Schrandt

“What else can I say? The composition of this image is flawless.” —Chelsea Bakos-Kallgren 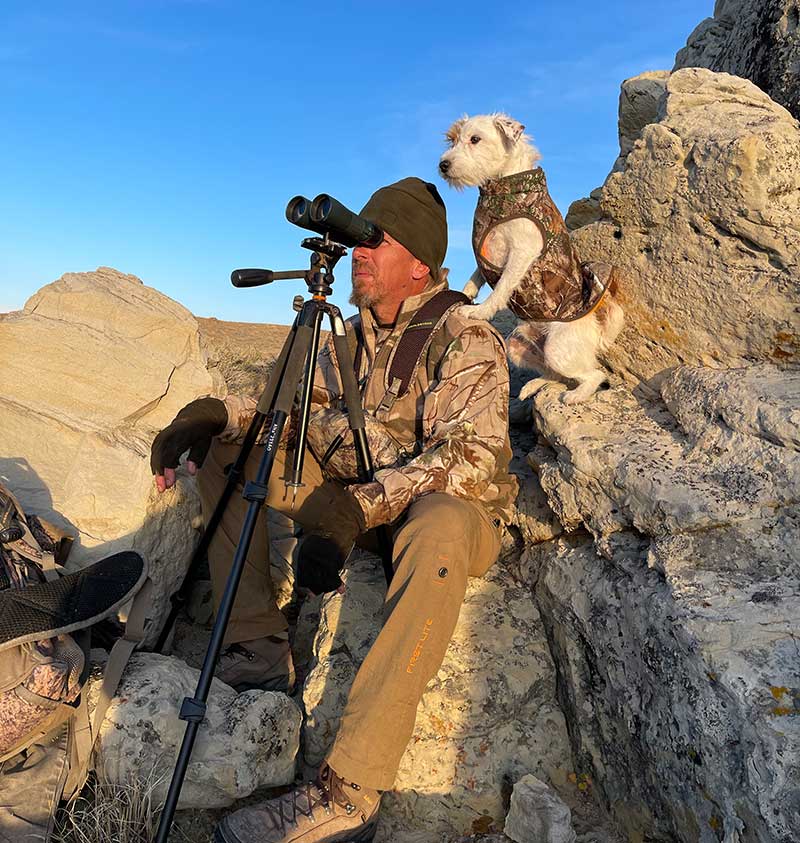 There were actually two dogs along for this family elk scouting trip in late September 2021, but Indy — the Parson Russell terrier depicted here — was definitely the one more interested in helping to scour the scene on Wyoming’s Green Mountain.

“Rodi — our other dog — was too busy chasing chipmunks; Indy, on the other hand, noticed how deeply focused my brother-in-law, Chris, was, so he started messing with him and pawing at him,” laughed Jojo Tobey, the wife of Joshua Tobey. “Eventually, he just climbed up and perched himself on Chris’s shoulder to see what was going on.” That’s when the couple, using their iPhone cameras, started snapping away. “It was so funny. They were both so serious.”

While Joshua may not be a professional photographer, he certainly has a keen eye as a second-generation wildlife sculptor whose work is on display in galleries in Jackson Hole, Santa Fe, Park City and Sedona. “We take plenty of pictures of our dogs, though,” added Jojo. “They go with us on all of our adventures.”

“I’m charmed by the sense of partnership between this photographer and his camo-vested companion.” —Lydia Schrandt

“The true bond between a human and their best friend emanates from this captured moment.” —Mark Edward Harris

Second Place: “A Man Is Waiting for a Tourist” by Seyed Mohammad Tabrizi 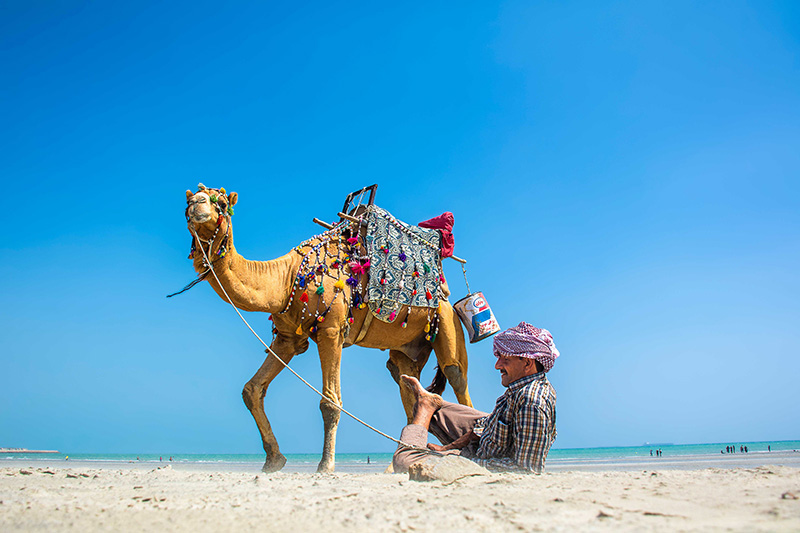 Taking a spin on a camel is a popular tourist attraction on Qeshm Island, an arrow-shaped island in the Persian Gulf and the largest belonging to Iran. It’s also a popular way for locals — such as this man, who is waiting for his next paying customer to take a jaunt along the golden sands of Naz Beach — to earn a living.

“Camels aren’t the only popular sights of this island, though,” noted Tabrizi, an Iran-based photographer who was also vacationing to the island when he took this shot. “There’s also mangrove forests, Khorbas Cave, the unique gorge of Chahkuh Straight, blue dolphins of the Persian Gulf, Stars Valley’s majestic gorges and canyons, the neighboring Naz and Simin Islands and Namakdan Salt Cave.”

“I mean, who wouldn’t want that camel as a travel companion? This is so crisp, clear and vibrant, and it makes me want to hear this man’s stories.” —Lydia Schrandt

About the Global Rescue Photo Contest

Created by the world’s leading provider of medical, security, evacuation and travel risk management services, The Global Rescue photo contest began in 2013 to showcase some of the amazing expeditions and journeys our members undertake each year.

“Travelers were, and are, eager to fight back to regain their family vacations, adventure travels and business trips. The resilience captured in these images highlight the flexibility and toughness by travelers during a period when the whole world shared the same challenge,” said Bakos-Kallgren, the head of design in Global Rescue’s marketing department. “Congratulations to the contest winners and their subjects who found strength, spirit, courage, character, flexibility, hutzpah or determination in their homes and on the road.”

Follow Global Rescue’s Instagram and Facebook accounts to see more of the close to 500 submissions we received. In addition to regularly showcasing the shots, we’ll also be running a Reader’s Choice contest for the month of December 2021.