While enjoying a family vacation on a beach in southwestern France, Carolyn Lanzetta experienced a parent’s worst nightmare. Suddenly her three-year-old daughter, Cate, had a full-blown seizure. The toddler fell down, started convulsing and vomiting, and became unconscious for several minutes.

Cate was rushed to the local hospital. Her bloodwork and a CT scan came back normal, but doctors recommended that Cate undergo additional testing before the Lanzettas took the long flight home to New York City.

“Obviously, I was very nervous,” said Carolyn. “In the middle of the night, everything rushed through my mind: How were we going to get her home? Should we fly to Nice to get these tests done? Should we just go back to Paris and find a way to do it, or go to the closest hospital?”

The next morning, Cate had more seizures. The Lanzettas immediately took her to the children’s hospital in Bordeaux, where she was admitted.

Carolyn contacted Global Rescue. “I said, ‘I don’t know what to do. I don’t know what’s happening but I might need your help to get my daughter home if this gets worse.’”

The Global Rescue Operations team immediately began monitoring Cate’s treatment, conferring with the hospital’s doctors about appropriate tests and arranging for Cate’s records to be sent to Global Rescue.

“The Global Rescue Operations team was in touch with us on a constant basis. It was a huge feeling of relief that we weren’t alone, that the Global Rescue team was making sure that Cate was being treated at the level we would want her to be treated, that she was getting the right tests, and that the medicine was the correct course of action.”

Soon after, Cate was diagnosed with a severe, rare form of epilepsy. “Immediately our priority was how to get our daughter home,” said Carolyn.

Global Rescue deployed one of its critical care paramedics to fly to Bordeaux to meet the Lanzettas, care for Cate, and provide medical support on the journey home. The company handled all of the travel arrangements for the family.

Arriving at the hospital, Global Rescue’s paramedic met with the neurologist to review the medications and confirm checkout information. The next morning prior to the flight, he met the family for breakfast, during which Cate had several seizures. “He was able to see the seizures and was taking notes constantly on everything,” said Carolyn.

Then the journey home began.  “I was sitting next to Cate, and the Global Rescue paramedic was right behind us. Immediately after takeoff to New York, she started having seizures, one after another. I was having an absolute heart attack. Here we were, stuck on this plane, and in an hour we were about to head over the ocean. Then there would be no turning back. It got to the point where I couldn’t sit next to her. It was really, really scary. I kept looking at our paramedic and he said, ‘It’s all right, she’s okay, she’s going to be fine.’ He was so calm, saying, ‘I have enough meds. We can get her back to New York. She could be having seizures the entire way and we’ve got enough medication to get her back.’”

Cate’s seizures finally subsided after 90 minutes and she was okay after the long flight.

“Had Global Rescue’s paramedic not been on that flight, I surely would have gone up to the flight attendants and told them that we had to get off the plane. There is no way I would have been able to get through that without Global Rescue’s medical help to say, ‘I can take care of it.’”

Carolyn continued: “It was a huge relief just to know that I didn’t have to be concerned about administering the medicine, administering it the correct way, making sure she was all right, if she ended up choking—all of those fears that go through you when your child is having a seizure.”

Landing in New York, Global Rescue’s paramedic accompanied the Lanzettas in the ambulance.

“When we arrived at the hospital, we learned that Global Rescue had provided the hospital with all of Cate’s medical forms and all the insurance information. We arrived and they greeted us with, ‘Hi Cate, how was your flight from Paris? Here is your bed.’ It was the most amazing feeling. We made it and somehow we are going to figure it out.  Back in the U.S., they were able to treat Cate’s condition much, much faster than it would have been treated in France. The seizures would have just gotten worse and worse and worse, and more frequent as we had gone on.”

Carolyn praised the Global Rescue paramedic. “He was fabulous, just the nicest person to be traveling with and so engaging with the whole family, including my six-year-old daughter. He was so calming and gave us such a sense of confidence coming home. He followed up regularly to see how Cate was doing. It was so above and beyond what his duties were.”

Reflecting on the experience, Carolyn said, “If your child has a cold, you can figure it out and there are things you can do. But all of a sudden, something happens that’s new, that’s frightening. What do you do? Honestly I have not stopped talking about Global Rescue to everybody I know since we got back. Friends and family who travel with kids say, ‘How do we even travel without having Global Rescue?’”

Cate is doing very well with medication and a special diet. She has not had a seizure since leaving the hospital in New York.

“Having Global Rescue there was like having a big layer of comfort around you. It was just an entire other level of care and comfort that I could not have dreamed of. I knew that Global Rescue was looking out for us and taking care of anything we needed,” said Carolyn.

“There‘s no way we would have gotten through it without Global Rescue.  I surely will not go anywhere out of this country without using Global Rescue. There’s just no way.” 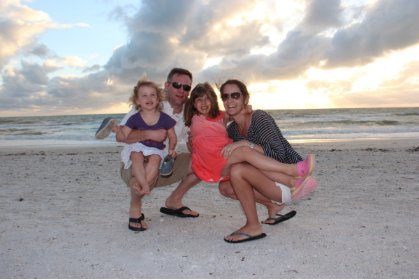