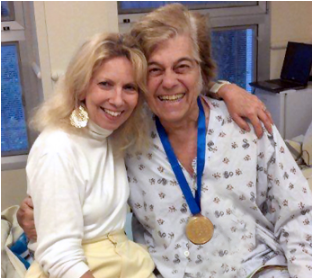 Dr. John Schmeelk, a university teacher, suffered a life threatening cardiac condition while living in Qatar. Global Rescue medical teams were soon on the ground, overseeing his initial treatment and orchestrating his subsequent evacuation by air ambulance to Israel for a life saving procedure.

In his letter Dr. Schmeelk recounts his experience and explains how Global Rescue provided so much more than evacuation services:

Now that I am safely back in the United States and on my way to recovery, I want everyone at Global Rescue to know how very grateful my wife, Jean, and I are for the wonderful, literally life-saving care that you provided not only for me but for her as well.

During the early hours of Friday, March 16, I was admitted into Qatar’s national hospital’s state-of-the-art heart pavilion that had just opened in October 2011. My defibrillator/pacemaker had shocked me twice in two days, and this was just the beginning of increasingly more shocks as my arrhythmia worsened. Very soon after my Human Resources Director put Global Rescue on alert that I might need to be evacuated to the US, Jean and I met David, a Global Rescue Medical Specialist, at my hospital bedside. He immediately began inquiring of the nurses and doctors about the details of my condition and my medications, and he began instructing Jean about taking carefully detailed notes, asking questions, and getting names of everyone who gave us information. He also encouraged her to go home and rest while he stayed with me. We had thought of Global Rescue as an evacuation service, but we were to learn that they are so much more.

On March 23, before I was stable enough to be evacuated, David was recalled to the US to handle another case. His replacement, a paramedic named Andrew, arrived on March 26 and continued the same extensive and informative care that David had performed. He monitored nurses’ care, explained what they were doing, occasionally assisted me himself, and asked both the nurses and my doctors questions that Jean and I did not know to ask. When we realized that I needed a heart ablation that the hospital could not perform if faulty nodes existed inside the heart tissue, Global Rescue immediately began contacting nearby hospitals trying to locate one that would be able to give the degree of care I needed. (I could not be directly evacuated to the US because I was not stable enough to endure the long commercial flight, and the medivac plane required refueling every three hours, making a long, trans-Atlantic flight even longer and more difficult.)

Once an appropriate hospital was located in Tel Aviv, Israel, Global Rescue arranged the medivac aircraft and doctor that would take me there, and they booked a commercial flight for Jean. When complications delayed our leaving the airport, Global Rescue in Boston stayed in touch with Jean via cell phone during her layover and arranged a hotel room for her to spend the night so she could arrive at the hospital about the same time that I did. Once on our way, Andrew accompanied me in the medivac closely monitoring my condition along with the evacuation doctor during the entire flight. The next day, he would leave me briefly to meet Jean when she arrived at the Tel Aviv airport. I learned later that Global Rescue’s “point man” on the ground in Tel Aviv arranged for a gentleman from the Israeli State Department to meet Jean at the door of the airplane when she landed and to escort her through Passport Control, ensuring that she moved quickly through the process and forestalling any language problems. This is but one example of the multitude of ways in which he proactively cared for both of us during the month of April while we were in Tel Aviv. In addition, he arranged resort accommodations for Jean within walking distance of the hospital at a greatly reduced rate, gave her several brief tours of the city, frequently talked with my doctors and relayed their information to Jean and me, to name just a few of his many ways of caring for us.

One of the most touching acts performed by Global Rescue was personally escorting Jean to Jerusalem to the Wailing Wall so she could post a prayer for my recovery before my first ablation. Such thoughtfulness and care were far beyond the call of duty, but very deeply appreciated by both of us.

We remained in Global Rescue’s care about six weeks, until they were able to deliver us personally to my cardiologist’s office in New York and hear that both my cardiologist and the ICD team were satisfied with my condition.

This past holiday season, my wife and I were able to celebrate more joyfully than ever before this year because we both know that these were  holidays I might very well not have lived to see. We send our deepest thanks to each of you—and we know there were many more “behind the scenes” whom we did not meet—at Global Rescue who participated in my evacuation.

With deepest respect and gratitude,