In danger on Makalu: “The quick and very professional response of Global Rescue saved my life.” 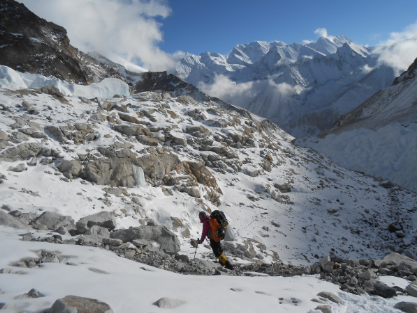 Irena Mrak on the slopes of Makalu

In October 2014, Slovenian geography professor, experienced climber and American Alpine Club member Irena Mrak was attempting Mount Makalu (8463 m) and conducting glacier research on the slopes of the mountain, on the border of Nepal and China. After spending four weeks above 5800 m, she fainted on the last morning in Advanced Base Camp, after descending and cleaning the high camps the day before.

Mrak’s boyfriend, Dr. Tomaž Goslar, told The Himalayan Times: “On that day, her friends had called me in Slovenia to inform me that she had been complaining about difficulty in breathing and blurred vision. It was then that I felt something was seriously wrong.”

Her condition deteriorated quickly and she lost consciousness within four hours of the beginning of symptoms. She was airlifted from Makalu Advanced Base Camp to Lukla, where initial medical treatment was performed prior to continuing the transport to Kathmandu. 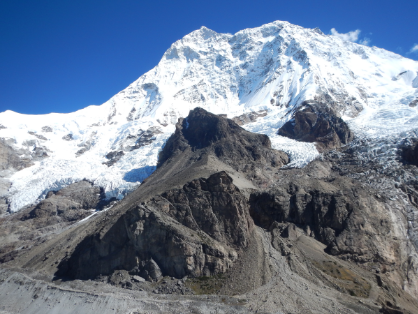 The south face of the mountain

At the time, Mrak was in critical condition. She had been admitted to the Intensive Care Unit and was breathing on a ventilator.  For several hours, her pupils were unresponsive, she did not react to pain, and her condition did not appear to be improving.  Hospital staff presumed that Mrak would not live due to severe High Altitude Cerebral Edema (HACE) but continued their efforts.

Hospital staff called Global Rescue, and we immediately deployed one of our critical care paramedics to Mrak’s bedside in Kathmandu. Once our paramedic arrived, he quickly arranged to have all of Mrak’s medical records sent to the Global Rescue medical team for careful review by Global Rescue and Johns Hopkins physicians. The following day, Mrak showed signs of increased consciousness and began breathing spontaneously, ultimately regaining consciousness.  Once out of ICU, Mrak continued to receive treatment for HACE and for a retinal hemorrhage.

The Global Rescue personnel met with Mrak’s physicians, obtaining details regarding the retinal hemorrhage from the ophthalmologist who examined her and assisting with the management of her care by relaying information to and from the attending and Global Rescue’s physicians.

With all tests and lab values showing continuous improvement in the following days, the Global Rescue medical team recommended that Mrak would be ready to be discharged shortly and to fly home to Slovenia. Dr. Goslar, an ICU physician in Slovenia, had flown to Nepal to be with Mrak and accompanied her home. He expressed his gratitude to the Global Rescue team.

Today, Mrak has made a nearly full recovery. She continues to experience residual visual disturbance in both eyes.  Based on further ophthalmological evaluations, Mrak’s specific eye injury showed her case to be unusual, even exotic, since a similar case has not yet been recorded in the medical literature. After four months, she has regained some vision and can read with difficulty but still cannot see colors properly. Mrak is optimistic that it will resolve even though the doctors are unsure.  Her illness was most likely a result of complete physical exhaustion after long exposure to high altitudes, extreme weather conditions (cold and wind), and poor diet (canned food, low on vitamins). 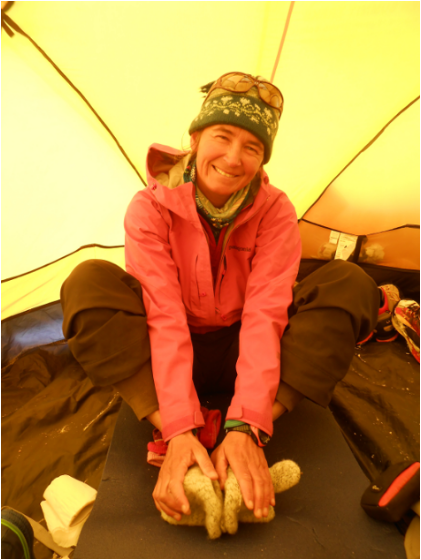 “Global Rescue responded immediately and had their paramedic on site in less than 24 hours,” she noted.  “The Global Rescue operations personnel knew all the details about my case and could provide them to my family.  Global Rescue gathered all the necessary medical information from family members and shared them with hospital staff.  I would like to especially recognize the Global Rescue paramedic who attended to me for his professional attitude and warmth.

“Global Rescue did their job well. I have already informed the Alpine Association of Slovenia about our positive experience and will definitely recommend your services in the future,” she said.

Concluded Mrak: “The fast reaction of my climbing partner Mojca Svajger, the people in the ABC, Dr. Barun Rai, the American climber Garrett Madison and his Norwegian client Andrea, the Nepali staff, the doctors in Vajodha hospital in Kathmandu, and the quick and very professional response of Global Rescue saved my life.” 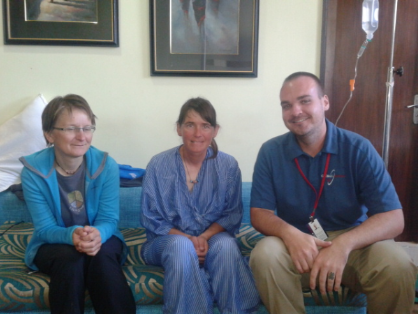 (All photos courtesy of Irena Mrak)