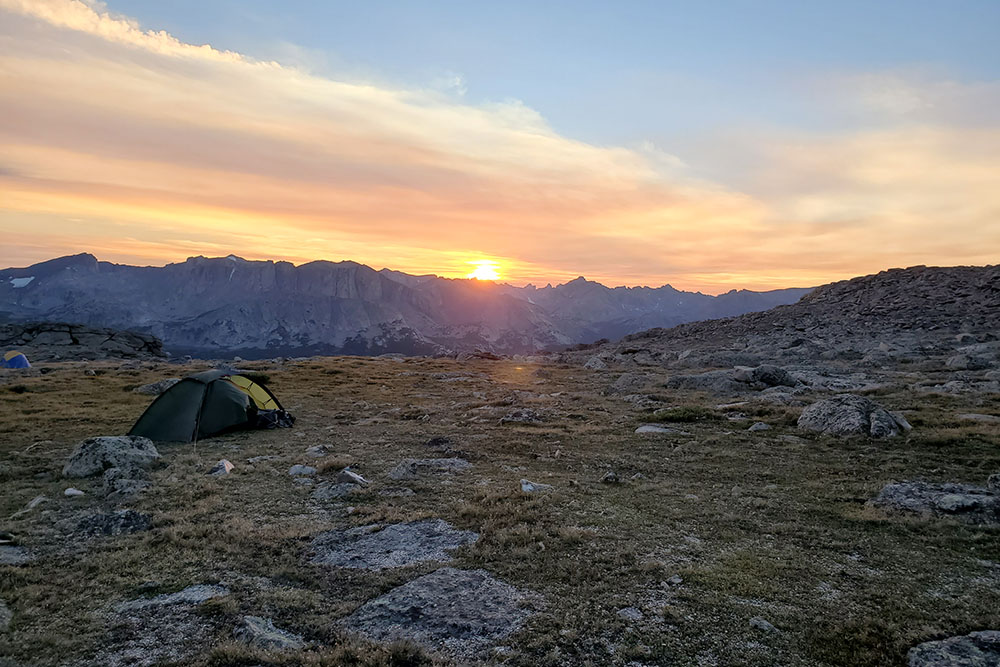 The Wind River Range in Wyoming is a popular destination, attracting trekkers to the remote wilderness and its beautiful exposed granite in the higher elevations. Mary Kelly, who splits her time between Austin, Texas and Boulder, Colorado, recently embarked on a seven-day backpacking trip in the Wind River Range and ended up doing two things she hadn’t done before.

The first novelty was using llamas during the trek.

“A friend of ours suggested we use llamas to carry the loads. I’ve never had any experience with llamas before. We were each responsible for our llama during the trek,” she said.

Kelly and her group covered 10 miles the first day and about the same mileage on the second day.

That’s when the second thing she’d never done before happened.

It was the end of the day and Kelly’s group was within 200 yards of the campsite. There were tight stony paths leading to the campsite. Kelly was walking with her llama behind her. Unfortunately, that llama was one of the unruly ones.

“There were a couple of rock steps on the trail, which was narrow and didn’t have any room on the sides to step off. I started up the steps, leading the llama. That’s when the 400-pound llama carrying another 75 pounds of gear jumped up the rocks and hit me full force, knocking me over. I landed on my wrist,” she said.

Kelly knew her injury was serious.

“I pretty much knew I wasn’t fine but I was hoping it was just a sprain. We climbed up to the camp without any problem.”

She wasn’t too worried about her injury since the group had been preparing well in advance.

“We were serious about the trip. Our group had been working on our list of what to take and how to prepare for some time.”

There was an ENT doctor with the group and he was certain Kelly’s wrist was broken.

“I’d never had a broken bone before. He put a rubber splint on my arm and we made a sling out of t-shirt. Then our trip leader used a satellite-connected two-way communication device to contact Global Rescue and they responded immediately.”

“My husband thought they would send out a ranger with a horse to ride out. I told him, ‘There’s no way I’m riding a horse. I don’t ride horses. It’s going to hurt. I’m going to walk.’”

Nightfall was coming quickly with the skies darkening.

“About 30 to 45 minutes later we heard a helicopter circling overhead. We wondered out loud, “Who’s that for?”

It was for Kelly.

“The helicopter was a pleasant surprise.”

The helicopter pilot identified a landing site about a mile away from the camp and two rescue workers hiked to Kelly and the group.

“They were fantastic. They asked if I could walk and I said ‘Yes.’ I didn’t actually feel that bad, probably because of the adrenaline. We made our way to the helicopter to fly out.”

When she arrived at the Lander hospital it wasn’t too crowded and she saw all the extra precautions due to the pandemic.

“I was quickly taken into an examination room where I was assessed. The ER doc reset the wrist and gave me some pain blockers. I ended up staying the night in the hospital and left the next day.”

Reflecting on her experience, Kelly felt incredibly lucky but also glad she and her group were prepared with the InReach, the splint and the Global Rescue protection.

“I’m glad I purchased the protection. Wind River Range is pretty remote. There’s not an easy out. It would have been a 20-mile walk out which would have been risky since I could have fallen again and had a more serious injury.”

She was impressed at how seamlessly everything worked.

“I feel like everything functioned so well. Everyone was so responsive. I know [Global Rescue medical operations experts] called often during the hospital stay and followed up afterward. It was much appreciated.”

Kelly’s experience convinced her to include Global Rescue membership for trips and recommend it to others.

“Do not hesitate to do it. It’s completely worth the price of purchase. You might not need it but for peace of mind it’s worth it. And, if you do need it, it works! So, it’s an easy decision — don’t even debate it.”

Kelly’s other “lesson learned” is to skip the llama trauma in future trips.

“I think I’ll go back to carrying my own load next time.”