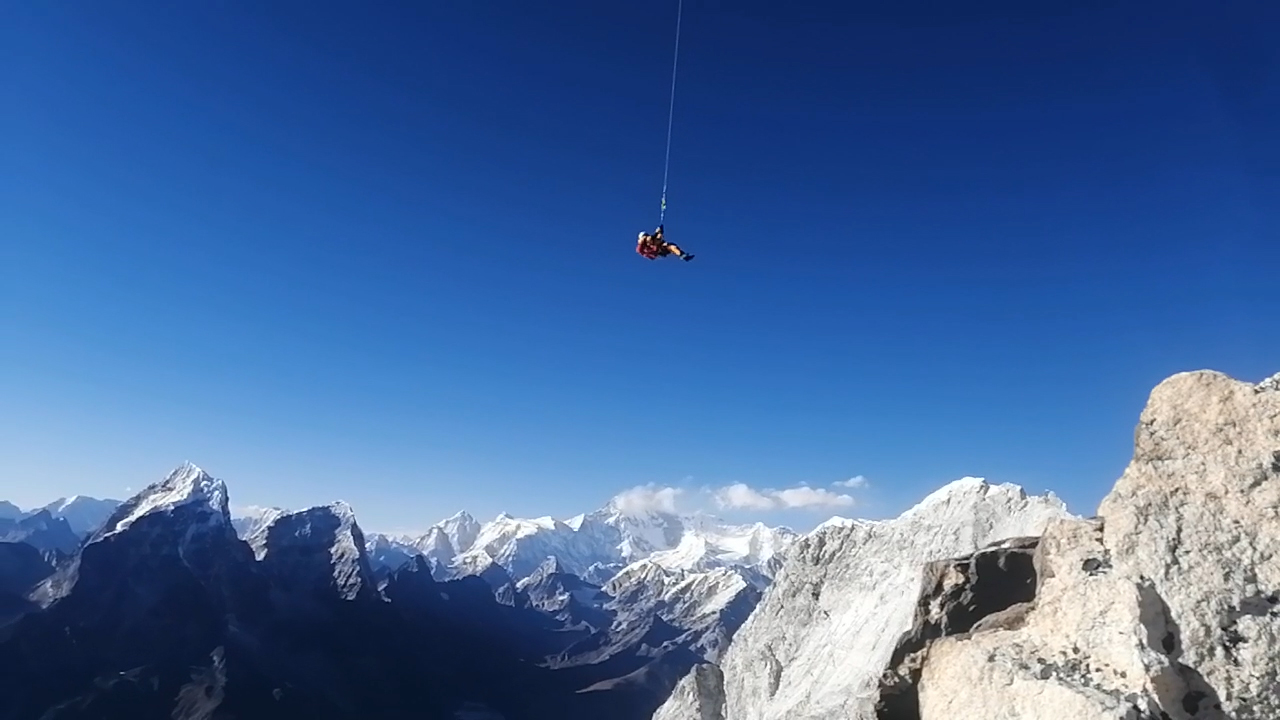 “I suddenly realized that my fingers were numb and I wasn’t able to hold anything properly.”

No stranger to high climbs, Siddhanta is the youngest mountaineer in the world to climb both the Seven Summits and the Seven Volcanic Summits, a feat made more impressive by the fact he was asthmatic as a child.

The pandemic curtailed all of Siddhanta’s high-altitude climbing plans in 2020, including any in the Himalayas since the pandemic froze international flights into Nepal. But when he and his India-based climbing group discovered they would be able to cross the border overland on the condition of an additional six days of quarantine, they set out to climb Ama Dablam.

“We knew this mountain was very technical,” he said.

To summit Ama Dablam, climbers need to get past two technically challenging sections. The Yellow Tower – the near vertical rock pitch and considered the technical crux of the route – and the Grey Tower, a 75-degree angle blocky granite loose mix outside of Camp 2.

“Typically, on any summit day I use big mittens but this mountain was different and for this summit I should have used more technical gloves that permit greater hand and finger dexterity. With the big mittens it was getting very difficult to climb the rocky sections so I switched to climbing gloves. Unfortunately, they were not Gore-Tex material and didn’t protect against the wind,” Siddhanta said.

“I was losing sensitivity,” he said. “I started massaging my fingers to increase circulation.”

Standing still while working to get his fingers in better condition took its toll. The altitude combined with the cold, windy weather was causing Siddhanta to lose body warmth.

“I knew if I kept going much higher the wind would pick up and I’d be in a difficult position for any kind of rescue, if needed,” he said. “I decided to go back.”

During the descent, Siddhanta was belayed for safety and used a fixed line to assist on a steep-angled section. But the combination of fatigue, numb fingers and bad luck led to a life-threatening slip followed by a sweeping sideways swing along the rock face while suspended from the belay line.

“Fortunately, I didn’t directly hit the rock face wall when I swung out, but on the swing back I hit my back and my helmet,” Siddhanta said. “I was so scared because I still had to get to Camp 2 and then Camp 1, which is technically challenging whether you’re going up or down. I wasn’t confident.”

Siddhanta made it to Camp 2. But he was physically banged up from his fall, and his fingers weren’t getting any better.

[Related Reading: What You Should Know About Frostbite]

“At Camp 2 I started taking some medications based on my training. I couldn’t feel my fingers at all, and I started thinking about two friends who had lost many of their fingers on previous expeditions. I was so scared. I knew I wouldn’t be able to get from Camp 2 to Camp 1.”

It was a dark moment for Siddhanta who thought, “This is it…I may not be able to come back.”

But then he recalled something important, and probably lifesaving: “I remembered I had renewed my Global Rescue membership for this expedition.”

“The rescue helicopter arrived and lowered the rope. I was in no condition to get myself into the harness securely without the help of my Sherpa. Then the helicopter flew me to safety.”

People often incorrectly assume the person in the harness at the end of the long line rescue rope is hoisted into the helicopter. Siddhanta’s rescue flight was a 10-minute journey dangling about 100 feet (30.5 meters) below a helicopter zipping through the Himalayan range.

He was transported to a hospital where he received treatment for his injuries and ultimately discharged after a few days.

“The doctor told me the courses of action and precautions I took ultimately saved my fingers, if not my life,” he said.

Siddhanta has no doubt that his decision to abandon his Ama Dablam summit attempt was the right one.

“Thank goodness for Global Rescue because if it was not a timely rescue then I could have been in big, big trouble and perhaps my mountaineering career would have ended.”