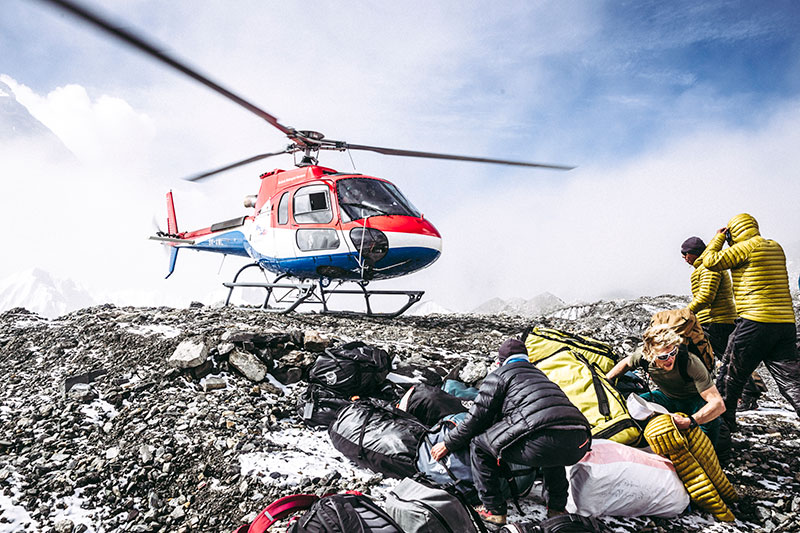 After the pandemic was declared more than a year ago, international borders closed and travelers hustled to return home quickly and safely. Vacations were canceled, business trips scratched, and leisure travel plans abruptly cut short. More than a year later, vaccinations are being distributed, air travel is bouncing back steadily and international borders are opening up.

Throughout the onset of the pandemic and without any disruption, Global Rescue has responded to the needs of travelers at home and abroad. In a typical month, Global Rescue performs hundreds of operations in dozens of countries. Below are highlights from some of our most recent operations in various locations.

Nepal – An Estonian woman in her mid-30s was climbing in Nepal when she called Global Rescue from Mount Everest Basecamp reporting severe fatigue, shortness of breath, and a cough. Her oxygen saturation was dangerously low at 60% and physicians suspected she was suffering from High Altitude Pulmonary Edema (HAPE) or Pneumonia with Pharyngitis. Medical staff and Global Rescue performed further examinations and recommended her for immediate helicopter evacuation to the Hospital for Advanced Medicine & Surgery in Kathmandu for treatment. Two days later, her condition improved and she was discharged with instructions for self-care and follow-up. Less than a week after her evacuation and treatment, her treating physician cleared her.

Papua New Guinea – Children fall off their bikes all the time. But it’s not every day that they fall and sustain a serious injury while in a different country with no readily available health facility nearby. Such was the case for a 9-year-old American boy, who suffered a blow to his chin after a bicycle accident in Madang Province, Papua New Guinea. After Global Rescue organized a helicopter evacuation to a clinic 170 miles away in Ukarumpa, the child was stitched up, but diagnosed with a broken jaw that required surgery. Unfortunately, Australia — the nearest location to find a qualified surgeon — had a travel ban in place, so Global Rescue chartered a medical evacuation flight back to their home state in the U.S. The flight path required a stop in Sydney and Global Rescue successfully coordinated with the Ministry of Health on behalf of the family to obtain an exemption from the country’s required quarantine.

California, United States – A Global Rescue member was hiking alone in California he was caught in a sudden snowstorm. With conditions worsening, the member took out his Bivy satellite communications device and activated it. When the Bivy Stick is paired through Bluetooth with a smartphone you have two-way satellite communications capability. The smartphone does not require cell service for this – it is working via the satellites through the messaging device. Through his Bivy communications device, he connected with the Global Rescue operations team experts who obtained details on the member’s location and condition. The operations team initiated a rescue. They proceeded to coach the member through the best safety procedures including remaining in his location, insulating himself from the ground and building a fire. Local search and rescue resources were deployed and successfully recovered the member and brought him to safety.

Mozambique – Despite receiving clearance from his cardiologist before traveling to southeast Africa, a week into his hunting trip, a 70-year-old Texas man with a history of congenital heart disease found himself experiencing the tell-tale signs of a heart attack: edema in the legs and difficulty breathing. After a TotalCare Consult physician consultation, Global Rescue recommended the member receive an in-person evaluation as soon as possible and conducted a field rescue from the remote hunting camp to Instituto Do Coração (ICOR) in Maputo. After being diagnosed and treated for congestion, the member was released from the facility to his hotel, where our medical staff continued to monitor his condition until he was deemed fit to fly back to his home state.

Nepal – Exhaustion and altitude sickness are far from the only calamities climbers face when summiting 29,032-foot Mount Everest. A painful eye condition called snow blindness can also occur – and that it did for a 27-year-old Indian man while he was descending from Camp 3 to Camp 2. Despite treating himself with an eyepatch and eye drops at the advice of the Base Camp physician, the member reported after two days the pain was worsening. Global Rescue was contacted and a field rescue was set in motion. After a helicopter evacuation to a hospital in Kathmandu, the climber was prescribed an antibiotic and ointment eye drops and cleared to return to his hotel. In a follow-up call from Global Rescue the next day, he reported his eyesight had improved and the pain was now manageable.

The Bahamas – During a trip to Grand Bahama, a husband contacted Global Rescue on behalf of his 40-year-old wife, reporting that she was experiencing sharp pain in the lower left side of her stomach, as well as frequent vomiting. While her tests conducted at Freeport’s Rand Memorial Hospital (RMH) ruled out appendicitis/pancreatitis, she once again found herself consistently vomiting a few days later. Global Rescue facilitated a call between our doctors and RMH’s treating doctor and she was re-admitted to the hospital, where the general surgeon and our medical team agreed on an air ambulance transfer back to the U.S. as she was not fit to fly commercially. She was successfully evacuated to  Fort Lauderdale, Florida, where she underwent an endoscopy and was diagnosed and treated for Acute Gastritis. She was cleared that day and the couple was able to return to their home in Pennsylvania.

Nepal – A 38-year-old Nairobi woman was trekking at an altitude of 5,300 meters (17,388 feet) in Gokyo, Nepal when over two days she suffered increasing symptoms of severe headache, shortness of breath, vomiting, fatigue, dizziness, loss of appetite, and difficulty sleeping. She successfully descended a few hundred meters (1,300 ft) but her symptoms persisted. Global Rescue was notified and, following a medical evaluation, it was determined that she had acute mountain sickness. Treatment was started and airborne evacuation to Lukla Hospital was initiated. After treatment and follow-up consultation, she was cleared by a pulmonologist with instructions to allow her body to fully recover by avoiding any strenuous activities, including additional ascents.