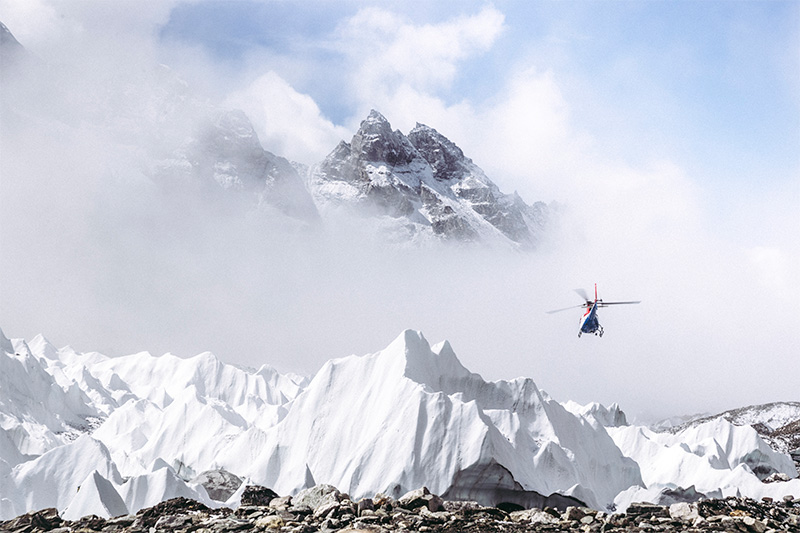 In a typical 30-day period, Global Rescue executes hundreds of operations in dozens of countries and principalities. But for this special edition of Global Rescue’s Mission Briefs, we are exclusively highlighting a few of the many Himalaya rescue operations completed in April.

Following a two-year, pandemic-related disruption in trekking and mountaineering in the Himalayas, the return to the famous mountain range is breaking records for the spring climbing season. “The overall number of permits for climbing in the Himalayas is a record this year, and we’ve seen a corresponding record number of rescues throughout the region,” said Dan Richards, CEO of Global Rescue.

“The days are long, often lasting up to 16 hours. We are flexible and physically fit to be efficient on the ground. We make certain to have a plan B that includes a sleeping bag, portable oxygen canisters and special high-altitude equipment when we pack — in case we have to overnight on the mountain at Mount Everest Base Camp (17,598 feet/5,364 meters) to support emergency rescue operations,” said David Koo, a former combat medic and the associate director of operations for Global Rescue.

In a typical 30-day period, Global Rescue executes hundreds of operations in dozens of countries and principalities. But for this special edition of Global Rescue’s Mission Briefs, we are exclusively highlighting a few of the many Himalaya rescue operations completed in April. 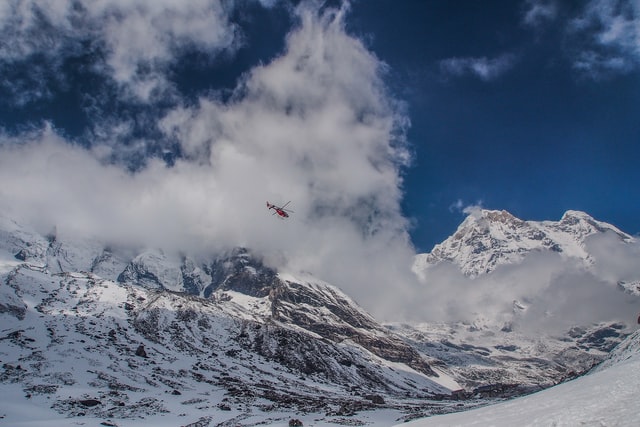 After summiting Annapurna 1, a member experienced shortness of breath, hypothermia, an inability to walk and was severely exhausted during his descent. Stuck at Camp 4 (26,000 feet/7,924 meters) at night, Global Rescue coordinated with a Sherpa who was able to help the member descend to 23,000 feet/7,010 meters. The member remained weak, hypothermic and sleepy despite receiving oxygen support. With no helicopter landing zone available due to the terrain, a long-line rescue was the only way to evacuate the member. Global Rescue’s Koo met the member at Annapurna 1 Base Camp following the long-line rescue and escorted him to the hospital. The member was diagnosed with high-altitude pulmonary edema (HAPE). He was admitted and treated overnight before recovering and being discharged by his treating physician.

Broken Ribs After a Fall

During a routine acclimatization descent from Annapurna Base Camp, a member fell and landed on a stone and suffered a large bruise on his back and a laceration near his left eye. Following the accident, the member had difficulty breathing, especially when mobile. Global Rescue activated a helicopter field rescue based on the potential of a lung and head injury. Following the medical evacuation, the member was examined and diagnosed with two rib fractures, partial lung collapse, a mild buildup of fluid between the layers of tissue lining the lungs and chest cavity, and mild hepatomegaly. The member was cleared fit to fly to his home in India.

A member from Ireland required an airborne field rescue after arriving at Camp 4 where he began suffering from altitude sickness, snow blindness, and frostbite in the face. Due to the severity of the symptoms, Global Rescue organized a helicopter rescue and evacuation to a hospital where the member was evaluated and diagnosed with sunburn, snow blindness and high-altitude cerebral edema (HACE). He was treated and discharged with a prescription for medications and a follow-up appointment.

Experiencing difficulty breathing, a member contacted Global Rescue operations for help. She was examined by a nearby doctor who noted the member had low blood pressure, serum sodium, calcium and other electrolytes. She also received an ECG that showed signs of atrial fibrillation. She was provided with oral medications for rehydration and electrolyte replenishment. Unfortunately, her condition worsened and a medical evacuation was activated. She was transported to a hospital in Kathmandu and admitted to the ICU where she received further evaluation and treatment. Ultimately diagnosed with rate-controlled atrial fibrillation, HACE, dehydration and hypokalemia, her condition improved after a few days and she was discharged with home medications.

Three members were transported by helicopter from Mera Peak High Camp in a single field rescue to a hospital. One member fell on his left knee while on his descending trek down. He was examined by an orthopedic specialist and diagnosed with a soft tissue injury. Another member was suffering from high altitude sickness and was later diagnosed with AMS and kidney stones. He was prescribed medication and subsequently discharged. The third member had a fever and cough. His oxygen saturation level was 67% with a heart rate of 122 bpm. The member was medevaced to a hospital where he was diagnosed with AMS and systemic hypertension. He was treated and released to rest and recover in his hotel. 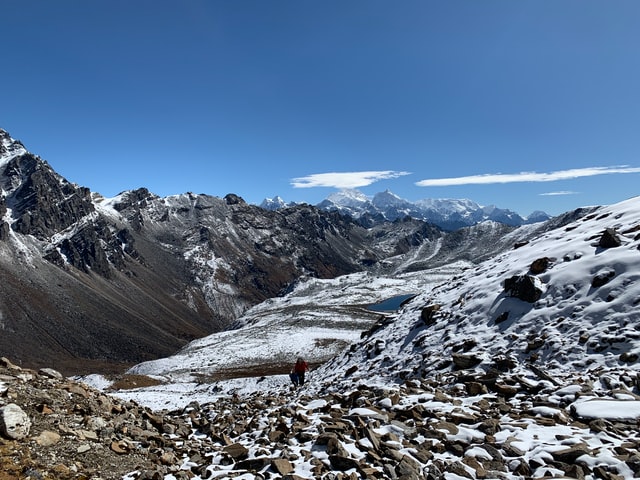 Dehydration on the Ascent

A U.S. member climbing Makalu, the fifth highest mountain in the world (27,838 feet/8,485 meters), was experiencing fever, mild headache and diarrhea. His condition did not improve despite taking Diamox and Azithromycin. Global Rescue was contacted and a helicopter was initiated for a field rescue of the member. The member tested negative for COVID-19 twice. At the hospital, he was placed under observation and given oral and IV fluids. The final determination was the member had acute diarrhea with dehydration. He was discharged with treatments for home recovery.

A member reported severe pain and swelling due to an abscess that developed where his leg connected to his prosthesis which could no longer fit due to swelling. The medical resource personnel at Mount Everest Base Camp advised the member’s further ascent or descent was not recommended. The member also started to manifest AMS symptoms. Global Rescue medical operations recommended and activated a helicopter evacuation to a hospital for evaluation. The member was diagnosed with a skin infection on the leg and acute sinusitis. He was discharged on the same day and advised to rest and recover until his flight back home.

HAPE and HACE at Camp 1

After reaching Mount Everest Camp 1 (19,900 feet/6,065 meters) a member from Japan was lethargic, short of breath and experiencing chest tightness. He was placed on oxygen support before in advance of an airborne medical evacuation to a nearby hospital. He was admitted and diagnosed with HACE, HAPE and dehydration. He recovered and was discharged the next day.

Gastroenteritis Proves Too Much

A member from New Zealand became ill at Mount Everest Base Camp. Several episodes of vomiting, diarrhea and stomach cramps contributed to overall weakness and an inability to trek without assistance. Despite receiving medication, his symptoms did not improve. Global Rescue medical operations activated a field rescue. The member was brought to a hospital emergency room where he was diagnosed with acute gastroenteritis with dehydration. He was treated and released.

A member from the U.K. started experiencing blurred vision and pain in his left eye. He was examined by medical staff at Mount Everest Base Camp and was immediately recommended for an airborne evacuation. Global Rescue activated a helicopter transport for the member to a hospital for evaluation by an ophthalmologist. The member was diagnosed with mild optic disc edema. Fortunately, no surgical interventions were required. The member was subsequently discharged and advised to remain in his hotel while his vision improved before returning to his home for reevaluation.

After ascending to Mount Everest Base Camp, a member was suffering from shortness of breath. His oxygen saturation levels were 50% (for most people a normal pulse oximeter reading for oxygen saturation level is between 95 and 100%). The member was placed on supplemental oxygen. He was evaluated and diagnosed with HAPE by medical staff at base camp who also recommended a helicopter evacuation to a hospital for additional treatment. Following his airborne transport to the medical facility, the member was diagnosed with HAPE. The member elected to recover at his hotel before returning to his home in Mexico.

Two days before reaching Mount Everest Camp 2 (20,997 feet/6,400 meters), a Global Rescue member needed medical evacuation after showing symptoms of AMS, including shortness of breath, headache, dizziness, blurred vision and unsteady feet. He received oxygen support and had been taking Diamox for a couple of days without relief. Global Rescue activated an airborne evacuation and successfully transported the member to Lukla (9,383 feet/2,860 meters) where he was re-examined and, based on his medical records, re-evaluated and diagnosed with mild HACE. The member recovered in his hotel where his condition significantly improved.

A member from Mexico battled altitude sickness while at Mount Everest Base Camp. Symptoms, including worsening headache that didn’t abate despite rest, hydration and taking medication. Global Rescue medical operations initiated a helicopter evacuation for the member to a hospital where he was diagnosed with HACE, severe AMS, acute bacterial dysentery and dehydration. He was admitted for further care and treatment and then released with home medications. Unfortunately, the member reported having severe abdominal cramps with diarrhea. He was re-admitted to the hospital with a diagnosis of bloody diarrhea, cramps and anal fissure. A day later he was released with medications and advised to follow up with his home doctor after a few days.

A 34-year-old member from the U.K. was unable to urinate, her body temperature was decreasing, and her breathing was labored. Her oxygen saturation levels were in the low-to-mid 40s while on supplemental oxygen. She was lethargic and unable to talk while at Mount Everest Camp II (21,000 feet/6400 meters). She was exhibiting signs of HAPE and HACE and Global Rescue activated a helicopter rescue. Upon examination at the hospital, the member showed evidence of an enlarged right kidney and a viral infection. Physicians prescribed medication with a recommendation for reevaluation after two days. The member decided to have her follow-up consult for her kidney in Kathmandu.

A member from India reached Mount Everest Camp 2 when she became weak, exhausted and unable to keep up with her group while on the ascent. She then developed headaches, dizziness, facial swelling and a wobbly gait. Her oxygen saturation level was 41%. The combined symptoms were clear signs of HACE, triggering an airborne field rescue. The member was airlifted to a hospital where she was diagnosed with HAPE, HACE and dehydration. She was admitted overnight and discharged in stable condition after IV hydration and medication treatment.