Which Trusted Traveler Program is Best for You? 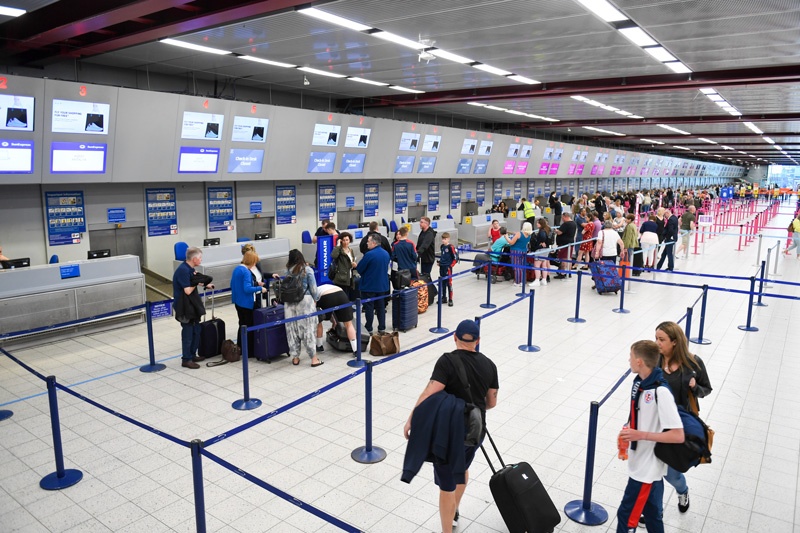 You’re running late for a flight and stuck in a long security line. You’re juggling bags, laptops and liquids. And you have to get your shoes off…and your kids’, too. You look with longing at the passengers breezing through the trusted traveler line, shoes on, laptops in their bags, and no tiny laces to tie up. It seems too good to be true. Can one really access such unbridled security line freedom?

The answer is yes. It’s just a matter of picking which one is right for you. Let’s take a look at the options.

Programs at a glance 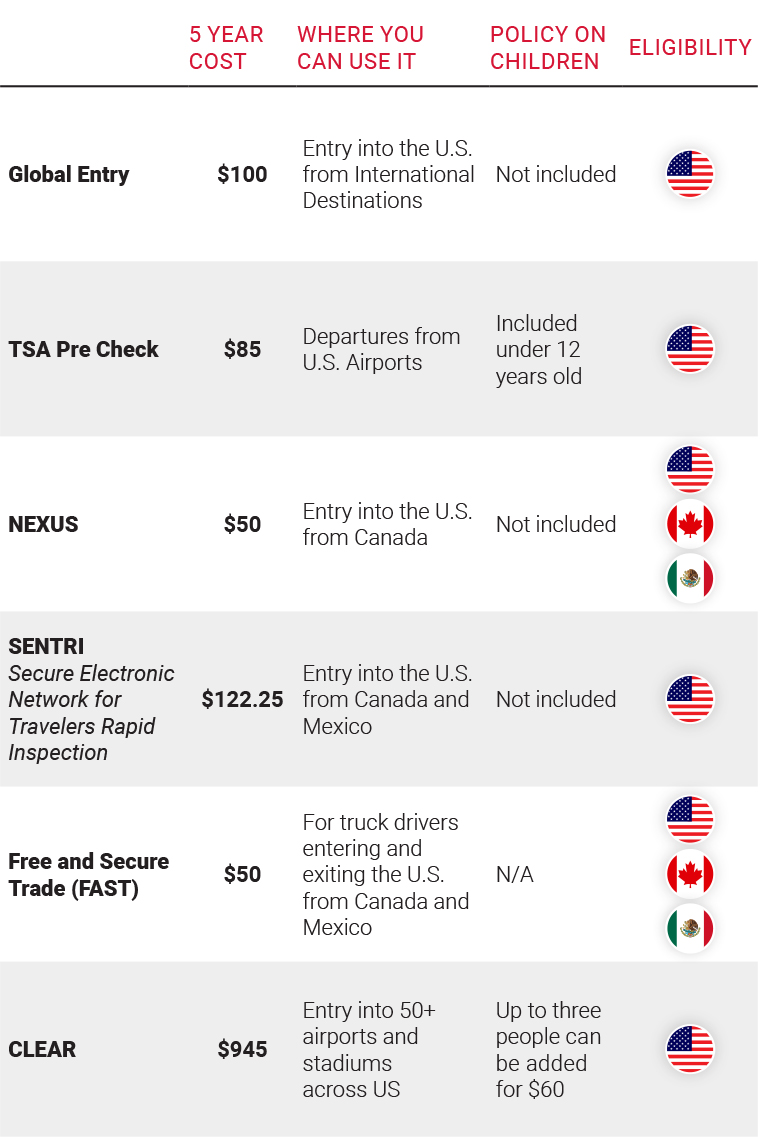 Where you can use it: Departures from U.S. airports

Application Process: Fill out your application online and then enroll in person with any enrollment center (there are more than 500 around the country!)

Where you can use it: Entry into the U.S. from International Destinations—by air, land or sea.

Policy on Children: Children are not included and must complete their own application and interview, paying the $100 enrollment fee.

Application Process: Fill out your application online and then if you are conditionally approved, you may enroll in person upon arriving into the country or at an enrollment center.

Where you can use it: Entry into the U.S. from Canada by air, land or sea.

Policy on Children: Each child must have their own membership.

Application Process: Apply online and then schedule your in-person appointment at an enrollment center in either the United States or Canada.

Where you can use it: Entry into the U.S. from Canada and Mexico

Policy on Children: Each child must have their own membership.

Where you can use it: Truck drivers entering and leaving the United States from Canada and Mexico

Application Process: Apply online and enroll at an enrollment center in the U.S., Canada or Mexico.

CLEAR is a bit different from the other Trusted Traveler programs which are run through the U.S. Customs and Border Patrol. CLEAR is an identity verification system that scans your eyes or fingerprints to confirm your identity.

Cost: $189/year. While CLEAR is more expensive than the other programs, there are ways to save by enrolling friends or through certain airline and credit card memberships.

Where you can use it: More than 50 locations across the nation. These include large venues like airports and stadiums.

Policy on Children: You can add up to three people to your membership for $60.

Application Process: Begin enrollment online and then complete it at an airport kiosk. There is no in-person interview required. 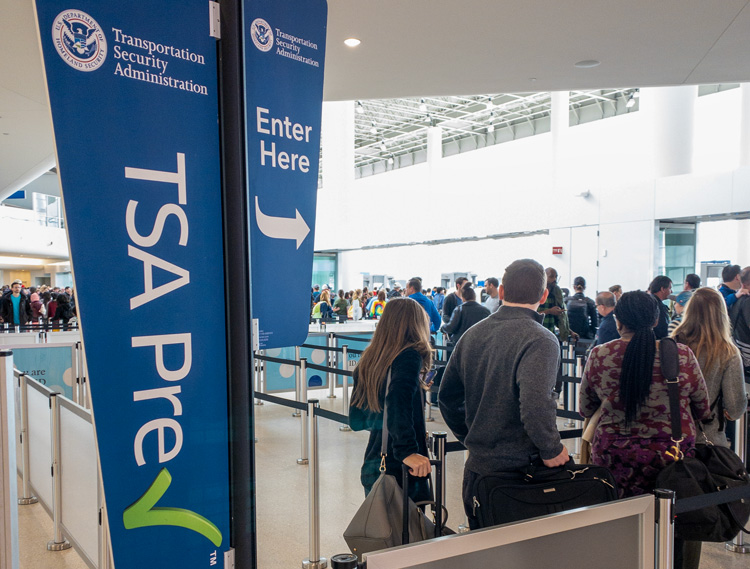 Which one is best?

Using the graph above, you can choose which is best for you, depending on your budget, your mode of transport and where you will be traveling.

If you are considering applying for Global Entry, note that there is currently a backlog of applications. In August of this year, Fortune reported that there is an 18-month delay following a surge in applications after the pandemic. If you plan to fly domestically, stick with PreCheck for now, where enrollment usually happens within three weeks.

If you are a U.S. citizen traveling to another country, the TSA has arranged similar agreements with other countries for expedited entry. You can view the list here to see if you might be eligible.

If you are traveling elsewhere in the world, your country or the country you are visiting may have their own individual trusted traveler programs. It’s a good idea to research what is available in your country or destination, but the Million Mile Secrets blog has compiled a helpful list of countries with such programs.

For U.S. citizens, choosing a trusted traveler program becomes a little murky when you must decide between PreCheck and CLEAR.

Here are the pros and cons of each:

Whatever you choose, the value of a Trusted Traveler program membership can’t be overstated, especially in this post-pandemic season. Eric Rosen for The Points Guy says “It makes more sense than ever to consider ways to expedite security screening at airports.”

Forbes calls these programs the “secret weapons” of experienced travelers who want to “speed through airport security and make screenings less intrusive.” So could there be any pitfalls to joining?

The biggest pitfall would be not to sign up for one! However, once you do sign up, make sure you enter your Known Traveler Number (KTN) every time you book your ticket and confirm in advance it is on your boarding pass. If not, you may have entered your information incorrectly, and it is worth a call to your airline or to the TSA.

Trusted Traveler programs are ideal solutions to improve your speed through security, increasing your peace of mind at the airport. Smart travelers will pack a Global Rescue medical evacuation and travel risk membership for peace of mind during travel. If you’re ill or injured during a trip, a Global Rescue membership covers the price of a field rescue or medical evacuation, which could cost up to $300,000. The cost to Global Rescue members? $0. No charge. Without Global Rescue, your travel emergency could take longer, cost more — and make a dangerous situation a lot worse. Given the volatility in the world right now, travelers need to be prepared to leave wherever they are quickly,” Global Rescue’s Richards told Forbes.