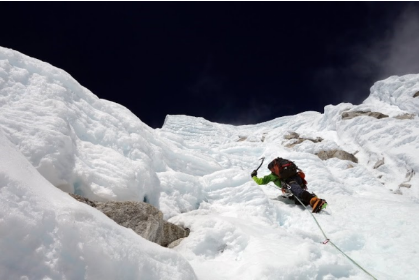 Ian Welsted climbing snow at 6,000 meters during his first attempt.

Noted alpinist Ian Welsted embarked on his first trip to Nepal in September 2014 to tackle the challenge of climbing the south face of Nuptse.

It is “one of the truly legendary big walls of the Himalayan mountains,” Welsted later described it in his Alpinist magazine account. 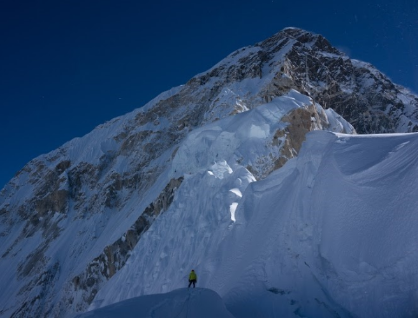 Jason Kruk at the team’s high point of 6,500 meters on their second attempt, looking up at the 7,750 meter west summit of Nuptse.

Welsted and climbing partner Jason Kruk had spent six weeks in a base camp at 5,400 meters on the south face of Nuptse. Following an attempt to climb to approximately 6,500 meters on the mountain, the pair realized that they would not be able to succeed in climbing it. They descended, headed to the nearest town and rested there for a couple of days.  Their plan was to walk to Lukla, two or three days away, on a well-beaten trekking trail.

On the first day of hiking, as they had descended to about 3,800 meters, Welsted suddenly lost consciousness. After several minutes, he regained consciousness but he was experiencing headaches, weakness and nausea.

A Medical Evacuation to Kathmandu

The Global Rescue operations team spoke with the guide accompanying the team and immediately arranged a helicopter evacuation to Kathmandu. Upon landing, Welsted was transported by ambulance to a hospital.

At the Kathmandu hospital, Welsted underwent a battery of tests, including an EEG, a CT scan and an MRI.

Welsted confirmed that while he had been taking good care of himself, he had never previously spent such a long period of time at such high altitude. Looking back, Welsted believes he passed out due to fatigue, stress, or some combination of the two.

“With Nuptse, you’ve got a base camp of 5,400 meters, which is certainly quite high. To climb at that altitude, you have to acclimate and we went for quite a long time,” he said. “Spending six weeks at 5,400 meters is the longest I’ve been at that high altitude for sure.” 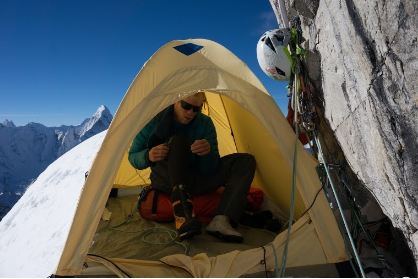 Jason Kruk getting ready for the day in a lightweight tent at about 6,000 meters with the famous Ama Dablam peeking out from behind.

The Global Rescue team worked closely with Welsted’s doctor until Welsted was ready to be discharged.

“One of the Global Rescue operations staff called me while I was still in the hospital and set everything in motion,” Welsted said. “Our tickets were changed so that I could fly home earlier.  I thought Global Rescue services were great.”

Welsted advised Global Rescue once he had safely returned to Vancouver, offering his sincere gratitude, and noting that he would be renewing his membership.

“Global Rescue covered all of my needs, more than to my expectations,” Welsted said. “I was heli-evacuated quickly and efficiently and then transported to the top hospital in Kathmandu. Upon discharge, Global Rescue took care of changing my return date to Canada, which was very helpful as I was in no great condition to deal with tracking down airline details.”

I’ve shopped around quite a bit – for example, the British Mountaineering Council has some kind of rescue insurance – but Global Rescue seems to be the best way of doing things that I’ve found.”

Welsted, an American Alpine Club member who had previously traveled to Pakistan on three occasions, also recalled how he first learned about Global Rescue.

“Steve Swenson, who was president of the American Alpine Club, was the one who introduced the idea of Global Rescue to us and I joined the AAC to get a discount on the membership,” Welsted said. “I know Global Rescue had rescued Steve about two years ago in India. So, for climbers, Global Rescue definitely seems like it works really well.”

Welsted concluded, “I definitely will not go on a similar trip without Global Rescue in the future. After this experience, I will continue to recommend Global Rescue to all of my climbing partners and friends going on mountaineering trips overseas.” 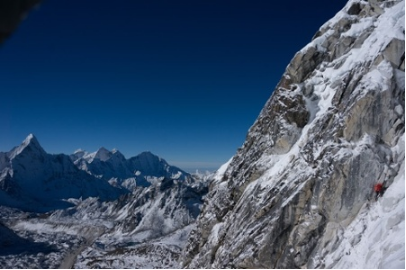 Jason Kruk low on the mountain at approximately 5,500 meters with Ama Dablam behind.