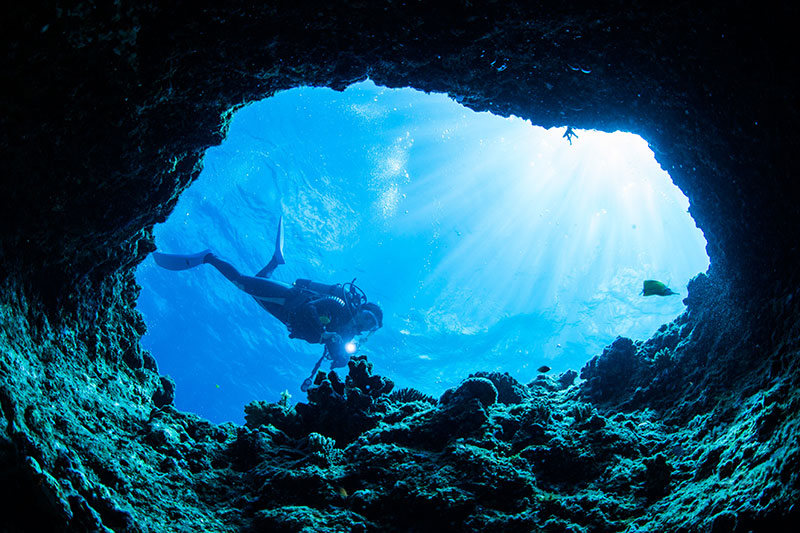 Best Cave Diving Trips and Safety Tips is part of the Global Rescue “No Restrictions” series, where we take a look at extreme sports and activities that many of our members have taken part in, or plan to. Unlike other providers, Global Rescue memberships do not exclude or restrict adventure activities, whether cave diving, sky diving, heli-skiing, BASE jumping and beyond.

Submerged iceberg caves in Antarctica. Underwater lava tubes in Hawaii. Bone-filled subaquatic tunnels of limestone in Zimbabwe. Accessing these, and many other, undersea treasures requires the adventurously curious to go cave diving — or underwater diving in water-filled caves and tunnels.

Long-time Global Rescue member John A. Kerechek dove a few of Hawaii’s lava tubes in the past. “I was interested in becoming cave diver certified,” he said. A lava tube forms when lava flow cools and hardens on the surface the while inside the lava keeps flowing at 2,192°F/1,200°C. When the volcano eruption stops so does the lava flow, leaving a hardened, underwater tube. Lava tubes can be seen on land and underwater in the Hawaiian Islands.

Popular lava tube dives — like Black Point, Frog Rock and Lava Dome — are on the northwest tip of the big island of Hawaii along the Kohala Coast.

“The west coast provides all the dive action you need for a wide variety of experiences, from colorful swim-throughs to fascinating lava tubes. The lava formations are, for the most part, blanketed in brilliant red and orange encrusting sponges,” said Kathryn Curzon, a freelance dive travel writer and award-winning author.

Hollywood consultant, documentary producer and author Jill Heinerth is one of the world’s most famous subsurface cave explorers. Her deep-water cave diving includes going below Antarctic icebergs, under the Sahara Desert and reaching the deepest subaquatic caves in Bermuda. She has recorded dive depths of 459 feet/140 meters, more than three times the depth limits for recreational divers.

Heinerth’s motivation goes beyond recreational enjoyment, rather she seeks to explore something meaningful to humankind. “I often work with scientists on important projects looking at issues such as climate change or evolution or survival of uniquely adapted animal species,” she said.

Whether you’re looking to combine an extreme sport with travel, or discover nature few others have seen, or connecting with scientific investigation, cave diving is an exciting option with lots of opportunities — if you’re willing to prepare and plan for it. 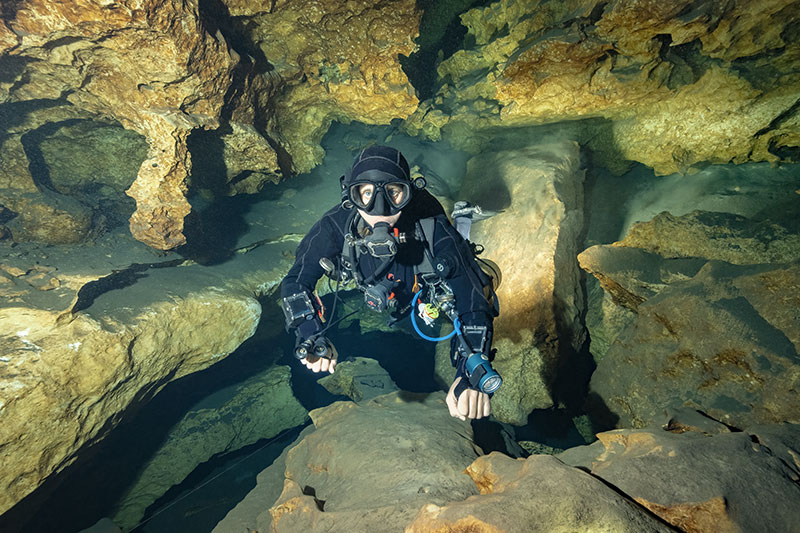 “It takes much more than an adventurous spirit and curiosity to go cave diving, even if you are an experienced open-water scuba diver. A specific pathway of necessary skills and demonstrated experience requirements must be met before scuba diving in a cave,” said Harding Bush, a former Navy SEAL and associate manager operations for Global Rescue, the leading provider of medical, security, evacuation and travel risk management services.

Bush says these qualifications include advanced open water diver, night diver and cavern diver. “The cavern diving certification is a stepping stone to cave diving.  The cavern diver certification allows divers to enter a cave with an overhead environment but only within sight of the cave entrance and unobstructed access to the surface,” he said.

To become a cavern diver, the diver must demonstrate cave diving skills in an open environment over several dives supervised by a qualified instructor.  The cavern diver qualification is available from conventional diving education certifying organizations such as the National Association of Underwater Instructors (NAUI) and the Professional Association of Diving Instructors (PADI).

As many popular cave diving areas are in freshwater lakes, there may be additional decompression requirements due to the elevation of the lake that requires the diver to use altitude diving decompression tables for an elevation above 300 meters.

The unique procedures of cave diving mainly emphasize navigation, gas (air supply) management, and performing in restricted areas. Underwater caves and tunnels physically hold divers back from direct ascent to the surface during much of the dive, making exiting a dive more challenging and dangerous.

Most open-water diving skills — like the ability to use a Self-Contained Underwater Breathing Apparatus (a scuba set) — are needed for cave diving. Additional skills, like buoyancy, navigating in darkness, and using guidelines are essential. Cave divers also need emergency competencies for recovering from air supply (gas) problems while in tight spaces with limited visibility. 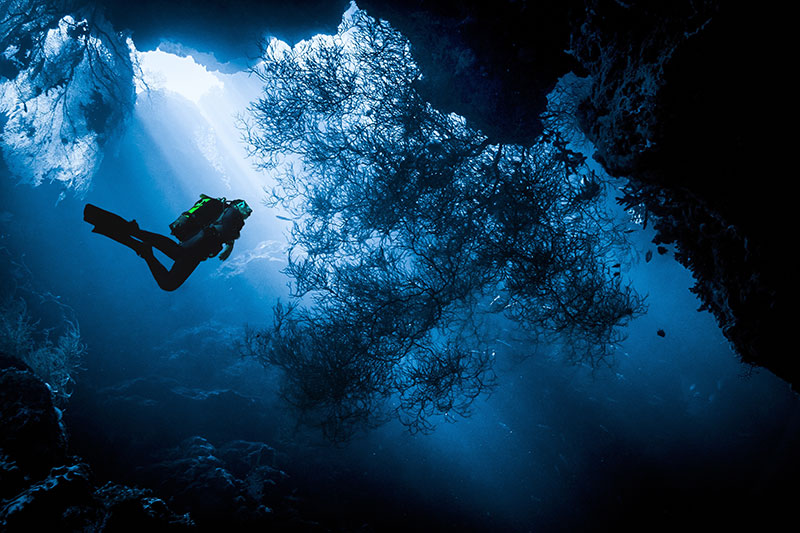 Side-mount harnesses are scuba sets mounted alongside the diver, instead of on their back, to permit greater movement. Rebreathers recycle exhaled air and help extend dive duration. Scooters, or diver propulsion vehicles, can extend the dive range by easing the workload on the diver, allowing speedier travel in open sections of the cave or tunnel.

The Good Divers Always Live — a Motto for Survival

Divers remember the five rules using the prompt: “The Good Divers Always Live” with the initial letter of each word stands for Training, Guide, Depth, Air and Light.

Cave Diving Destinations Near and Far 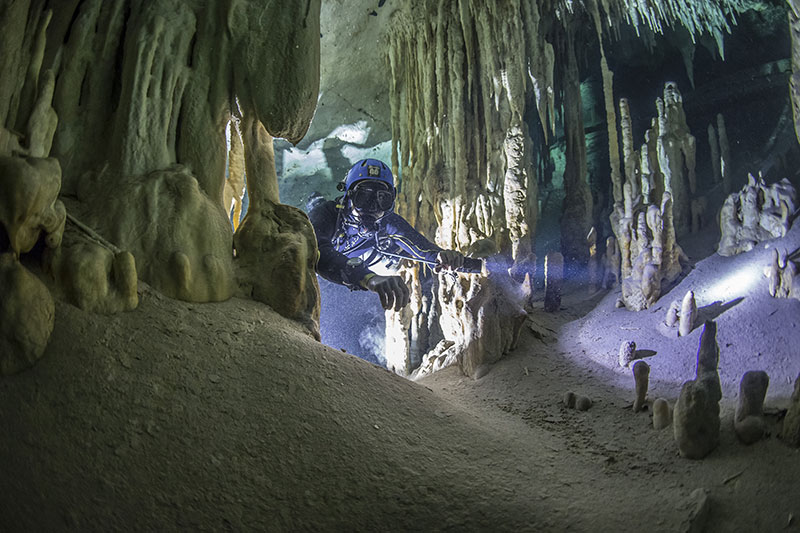 Cave diving opportunities are all over the world. Here are a few to consider as you think about and prepare for a cave diving adventure.