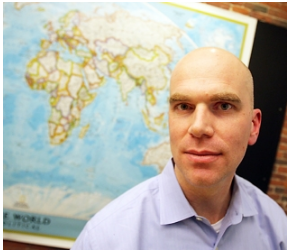 Click HERE to read the article in the Boston Herald

By Darren Garnick / The Working Stiff

Derek Rappaport meets his clients on the worst days of their lives.

It’s a situation the career paramedic has experienced countless times from the back of a Boston ambulance and a Duxbury fire truck. But now he’s operating under the additional stress of culture shock.

Imagine you tumble down a canyon in the Andes Mountains or have a heart attack in the jungles of Thailand. Your vacation is over, but that is the least of your worries. You’re facing life-or-death surgery and the local hospital doesn’t have the strictest standards of hygiene – let alone a doctor who can communicate with you.

Rappaport, 39, is the chief paramedic at Global Rescue, a Boston medical evacuation company guaranteeing travelers immediate emergency care and transportation back to the home-country hospital of their choice. Essentially, he and his staff are dispatched around the world to “look over the shoulder” of foreign doctors and ensure that medical procedures and advice meet American standards.

“We can get a helicopter anywhere,” he says. “Sometimes the foreign hospital welcomes our presence and sometimes they are immediately hostile. You have to know when to bare teeth and when to buy the nurses coffee. And you have to do it right because we only have one chance.”

While a patient is stabilized at the hospital, Rappaport uses a pen-sized scanner to share medical test results and data with physicians at Johns Hopkins Medicine in Baltimore. The Global Rescue team determines what medical action needs to take place overseas before coming home.

Rappaport, who sometimes needs to leave his wife and two daughters for up to 10 days with little notice, describes his role as part diplomat and part personal concierge. He’s delivered grandchildren’s “get well soon” cards to patients and fetched their favorite foods.

“When someone is experiencing their scariest day ever, you show up, you speak English and have massive medical resources behind you. It’s a very powerful feeling and great to be able to be there for them,” he says.

Global Rescue’s annual medical evacuation memberships cost $329 for an individual and $579 for a family, with rates doubling to cover security evacuations in cases of natural disaster, war or civil unrest. The company hires ex-Navy SEALs to handle the latter scenarios.

Rappaport spends most of his time in the Boston operations center on Broad Street, running the logistics of each rescue. He recently was dispatched to Haiti to help evacuate missionaries stranded by the earthquake and was sent to Brazil to scout out helicopter companies for medical emergencies in the Amazon rainforest.

“You can only do so much over the phone,” Rappaport says. “You have to meet face to face. I might have to call these guys at three o’clock in the morning and if I haven’t gone down there and shaken their hands, how can I depend on them?”

Other recent missions have included helping a magazine photographer with a broken back get evacuated from Bangkok and confronting discriminatory treatment in Bahrain based on the color of his client’s skin. The oil-rich Gulf country, which heavily relies on migrant workers from India for its construction jobs, sends those workers to “subpar” hospitals, according to Rappaport. He negotiated to have his Indian-American client, who suffered cardiac arrest, moved from the mediocre hospital to Bahrain’s best facility.

Although his job does have an adventure travel component, Rappaport notes that he rarely sees beyond the hospital halls.

“I can’t tell you a single thing about the places I’ve been to,” he says. “You can never really see the sites. You’re there for only one reason, to help the patient.”