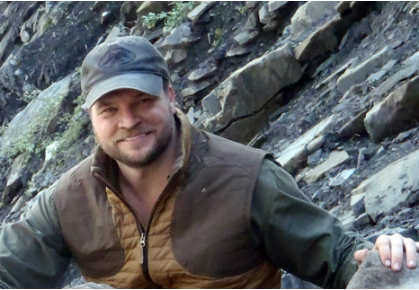 “During a steep, snowy descent through the Canadian Rockies in pursuit of an elusive Big Horn sheep, I found myself sliding down the mountain toward a cliff. As I went over the edge, I instinctively grabbed for a sapling.  It was like a made-for-TV-movie.”

With help from Global Rescue, Huskey lived to tell the tale of his ordeal.

“[As I fell,] the momentum of my weight and my pack dislocated my right shoulder, breaking the socket and tearing pretty much every tendon and ligament including my bicep. After finishing the descent with my arm duct-taped to my body and an extremely agonizing horseback ride to camp, I was able to call Global Rescue on the satellite phone,” said Huskey.

The Global Rescue operations team launched into action, making plans for a field rescue and evacuation to transport Huskey to a hospital to receive medical care. With significant snowfall forecast for the following two days, the helicopter rescue was set for the first break in the weather.

“First, they worked with my guide to ensure I was stable and gave him warning signs to monitor. Second and most impressive, they coordinated with my fiancée, the local medical personnel, the outfitter, the aircraft as well as the Royal Canadian Mounted Police and other local authorities,” said Huskey. “The snow and terrain prevented a ground rescue team from reaching my location, so as soon as the weather broke, Global Rescue had a helicopter en route. Their coordination and persistence was impressive.”

The helicopter transported Huskey to the hospital, where he was evaluated, admitted, and treated for his right shoulder dislocation. Global Rescue’s paramedics kept in contact with him throughout his ordeal to ensure he was receiving proper care until he was discharged.

Huskey’s advice: “If you are a back country adventurer, your Global Rescue membership should be at the very top of your packing list.”