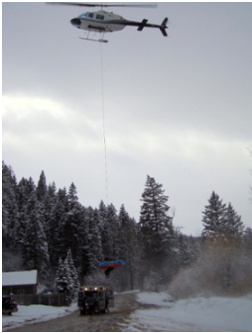 The family of Scott Mason thought they were offering a token of appreciation to the New Hampshire Fish and Game Department when they wrote a $1,000 check after the teenager’s rescue from the slopes of Mt. Washington.

Instead, they were putting a down payment on what turned out to be a $25,238 invoice.

The 17-year-old Eagle Scout was on a 17 mile hike alone through the Presidential Range when he slipped and twisted his ankle. He tried to descend via a quicker route, but was stopped by a raging river in his path. He camped out for the night by his stove — the weather was relatively mild for April – but when he didn’t return on time, search and rescue teams from across New England went out looking for him.

The resulting $25,000 bill for “negligence” has the adventure travel world debating the merits of charging for search and rescue operations, as more states are passing laws that allow local rescue companies to bill for their services. Actually, the debate has been pretty one sided: everyone but the entities waiting for reimbursement appears to be against it.

(We should note here that Global Rescue will pay for a member’s rescue helicopter, which is usually the meatiest part of the bill and is rarely covered by any sort of medical insurance or travel insurance.)

We won’t weigh in on this debate here; instead, we’ve asked avalanche and rescue specialist Doug Chabot to describe how these search and rescue teams are financed in general.

Outside of National Parks, Search and Rescue teams are mostly made up of volunteers. There is no national training or national funding helping these groups perform their duties. Consequently, the skill of the volunteers will vary wildly. Some have crack teams of medically trained rescuers ready to dive into swift water, scale cliffs or get short hauled under a helicopter to get you. Some have coffers overflowing with money to buy vehicles, buildings, gear and put on professional trainings. Others survive on bake sales and individual donations with no communal gear and no training.

Most SAR groups are run by the county, not the state. In fact most states do not fund SAR activities at all—it falls to locals to fundraise and try and get money any way they can. Many populated mountain areas are also resort communities, and SAR groups based in these affluent areas have benefitted from bed and resort taxes which pay for their equipment and rescue costs.But even these communities have taken a hit in the recent year as real estate and tourism needed a rescue too.

Contrary to popular belief, SAR is not synonymous with a helicopter. Most SAR groups don’t have access to one nor the funding to get one in the air. They are pricey pieces of machinery that can chew through a team’s annual budget in hours. But SAR will still come, the crowd is tough as nails, but it just may be on ATV, horseback, snowmobile or foot. Rescues are usually free to the victim.

The exception is in some states and all National Parks where they’ll bill you to recover rescue costs for negligence. Did you climb over the railing with the sign saying “Caution: Cliff”, slip, and almost die? There will likely be a bill waiting for you. Some states have gone down this road with legislative action since politicians like the idea of collecting a little extra money this way.

But this road has a few snags. If people will be charged for rescues they will inevitably be reluctant to call for one. This may be fine in the rare case of someone with a sprained thumb wanting a helicopter ride back to the car, but for more serious situations not getting help in a timely fashion will only make the emergency worse.

Injuries that were stable become life threatening. Hiking further and deeper into the deep woods instead of sitting and waiting for help (disregarding common SAR wisdom) will almost always end up poorly. SAR teams are there to make a bad situation better. That’s they’re mission—search and rescue. You call, they come and get you; not sometimes, but every time. And that’s because bad things happen to good, well intentioned people.