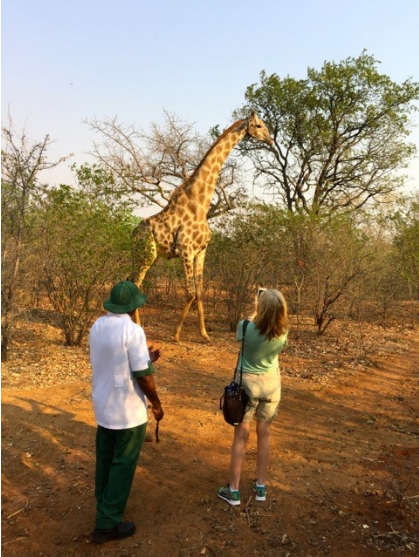 “I saw the giraffe pick up his right hoof and I thought, ‘he’s going to kill me.’”

While driving to their hotel inside Zimbabwe’s Mosi-oa-Tunya National Park, Daniel and Laura Core’s guide spotted two giraffes walking near the path. “The guide told us that it was OK to get out of the cart and take pictures,” said Daniel. “We were just filming the giraffes, didn’t get too close, and out of the corner of my eye is a really big giraffe coming from the opposite direction.”

An experienced veterinarian, Daniel was familiar with the signs of a hostile animal. “He didn’t lay his ears back, didn’t stomp, didn’t blow or anything like that. He just walked his way slowly up the game trail,” Daniel recalled.

When the giraffe was 20 yards away, Daniel’s guide picked up a branch and waved it in the air to scare it away. “About 30 seconds after that, I walked up to see what was going on. I heard our guide scream ‘Run!’” remembered Daniel. “In Africa, when your guide screams ‘run,’ it’s bad.”

The giraffe took one more step and swung its head “like a wrecking ball,” catching Daniel in the chest. The impact lifted Daniel into the air and threw him onto a pile of rocks. “I’ve been hit by bulls and kicked by horses, and I played football all through college. But, I’ve never been hit that hard in all my life,” he said.

Ten feet away, Laura was lying on the ground, “playing dead” so the giraffe would not attack her. “I saw the giraffe pick up his right hoof and I thought, ‘he’s going to kill,’” Daniel recalled. “Fortunately, my wife had dropped her purse about a foot and a half away from her torso. What the giraffe had his eye on was the poor purse. He came down on it and it just exploded.”

Daniel scrambled to his feet, grabbed his wife, and rushed to the cart. The guide gunned the engine and the three raced down the path.

After escaping the giraffe, Daniel took stock of his injuries. “I had about a three inch cut on my head and I could tell big contusions and bruises were coming.”

An Emergency Call to Global Rescue

Daniel and Laura went to the game reservation’s clinic to get patched up. With basic medical facilities and a registered nurse as the only healthcare options, Daniel turned to Global Rescue. He took pictures of all his injuries and emailed them to the Global Rescue Operations team.

Global Rescue’s medical team immediately reviewed his injuries and provided medical advice. Global Rescue’s team of physicians determined that there were no broken bones, no blood in his lungs, and no symptoms of a head injury. Daniel lucked out. He was bruised, but he’d be fine.

The Cores took another cart to their hotel room. “Right before we arrived at the hotel room, guess who’s standing there, straddling the path? The giraffe.” Fortunately, this time the Cores were able to pass by the giraffe without any conflict.

“I was very happy and pleased with the way Global Rescue handled my case. I’m a small animal veterinarian and I deal with bad stuff all the time, but I don’t know everything. I felt like I was in good hands and that, if I needed anything, Global Rescue would be able to handle it.  Everything ended well.” said Daniel.

Undaunted by the giraffe attack, the Cores continued their vacation through Africa. “Everywhere we went, people would ask, ‘did you hear about the American couple that got attacked by the giraffe?’” Daniel recalled. “We’d say, ‘yes, we’re intimately associated with them.’”

Video of the giraffe that attacked Daniel Core, seconds before the incident