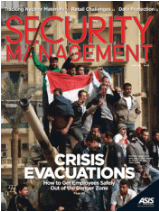 From the June 2011 issue of Security Management magazine:

Whether it’s political upheaval, such as this winter’s widespread uprisings across the Middle East, or nature wreaking havoc, as it did in Japan’s devastating one-two earthquake-tsunami punch, the ability to respond quickly is key to being able to safely extract personnel from hot spots. Invariably, however, valuable time is lost, because companies aren’t prepared to quickly communicate with employees in danger zones. “The communications part is far and away the most important component to every mission that we run,” says Dan Richards, CEO of Global Rescue, a Boston-based crisis response company.

Smartphones. In today’s world of split-second communications, the most valuable device is the one found in nearly every businessperson’s pocket. Simply put: the smartphone has revolutionized crisis communications. As long as employees’ BlackBerrys or iPhones can receive a cellular signal or snag a WiFi connection, a company or its security provider can call, text message, or e-mail its travelers and inform them immediately of danger roiling around them…

Satellite phones. The one caveat with relying on cellular-based smartphone communications is that they can fail or be disrupted. Thus, companies need alternatives that can serve as emergency backup communications devices. Crisis experts recommend a satellite phone, or sat phone, which also provides users multiple modes of communication such as voice, text, and e-mail. “[T]hey’re the only communication method that won’t be shut down by terrestrial disturbances,” says Christopher Falkenberg, president of Insite Security. When an earthquake or a tsunami hits, cell towers break, while satellites orbit safely in space.

Global Rescue’s Richards agrees. “When we deploy, we take sat phones…so we’re not reliant on the indigenous communications infrastructure,” he says. Richards adds that sat phones proved to be a useful alternative in Egypt when the government blocked cell phone communications at the start of the popular uprising that eventually toppled President Hosni Mubarak’s regime.

But satellite phones are not impervious to interruption by hostile regimes. Some countries, like Libya, have been known to block their transmissions, and both Libya and Cuba make it illegal to own a sat phone. There can be natural interference with satellite signals as well. Heavy forests, for example, can present connectivity problems for sat phones as can dense urban areas. “What you need is a clear line of sight to the sky,” Richards says…

Planning and Programs. Crisis response professionals hammer home the message that companies must do more than buy equipment or contract for services. Unfortunately, many companies have a consumerist attitude to crisis management. They “write a check and say, ‘If there’s a problem, we’ll call you,’” says Global Rescue’s Richards. “Those clients frankly are not going to be as successful in a disaster or crisis-type situation as companies that take these threats seriously.”