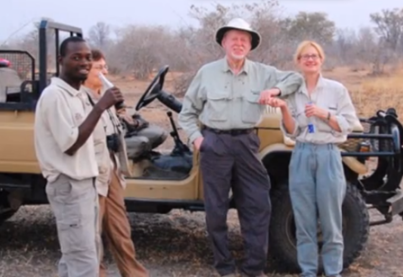 Brittany and Noah Myers, on top of Gokyo Ri the day before the Nepal earthquake

Brittany Myers and her husband, Noah, of New York City had just embarked on what was to be the trip of a lifetime.  Married earlier this year, they delayed their honeymoon with plans to take a longer trip. Both are avid climbers and trekkers, so the ideal honeymoon destination was Nepal, where neither had been.

In late April 2015, when they had finally begun their trip, they were deep in the Gokyo Valley when the unthinkable happened. A 7.8 magnitude earthquake shook Nepal. Brittany and Noah were without a guide, intending to trek through Nepal completely on their own. Global Rescue provided much-needed support in the aftermath of the earthquake.

“When the wind blows in the Himalayas, it makes a lot of noise, so at first it didn’t really seem like anything,” Brittany said, reflecting on her experience. “It became loud very quickly and suddenly everyone was panicked.” Fortunately for Brittany and Noah, the earthquake was not particularly damaging where they were. They were unharmed. However, it had become difficult to gather accurate information about which parts of the country were affected, and other equally pressing concerns.

Immediately after the earthquake, rumors swirled. Without access to credible information, Brittany and Noah struggled with what to do next. The couple decided to retreat from the Gokyo Valley, and head to the more densely populated Khumbu Valley, where it would be more likely to find other trekkers and climbers with information. After a two-day walk, they arrived Dingboche, where there was the only working landline and satellite wifi service through the entire Everest region. Here they were finally able to reach home.  Brittany reached her parents to let them know that she was okay. Brittany’s mother took it one step further. Remembering that her daughter was a member of the American Alpine Club, and that the AAC offered its members Global Rescue services, Brittany’s mother called Global Rescue to let them know her daughter’s location.

Global Rescue established communication with Brittany and provided timely and reliable information regarding the status of Lukla airport, among other updates. This information helped Brittany and Noah reach a decision about whether or not it was better to get out of the country as fast as possible, or to wait until the backlog at the airport had cleared. “We decided to extend our stay mostly because Lukla was in really bad shape,” said Brittany. “We extended our time and luckily, when we arrived in Lukla, it was relatively calm and we were able to leave easily.”

“The information from Global Rescue was essential. More than that, however, was the peace of mind Global Rescue provided when a medical issue arose.” In the last few days of the trip, Brittany became very sick. “It was the most awful I ever remember feeling,” Brittany recalled. “A Global Rescue team member who was communicating with me said there were paramedics in Lukla. I strangely felt much better the next morning and didn’t need the paramedics, but it was really helpful to know that I could reach out to them if I needed to.”

Despite their interrupted honeymoon in Nepal, Brittany has no reservations about returning in the near future. The couple is already planning their next trip for April 2016, one year after the earthquake. Back in the U.S., Brittany remains involved with the Nepal humanitarian effort. While in Nepal, she and her husband made contact with other trekkers and climbers who had already started to help with relief. Brittany and Noah assisted while there and continue to spread the word about aid donations and keeping the needs of Nepal in the spotlight.

Asked about Global Rescue membership for future travels, Brittany responded:  “Absolutely. It was great to know that your team had more information than my family, and if I’d had major issues, your services would have been a great help too.  Global Rescue was really on top of it and helped to calm my mind.” 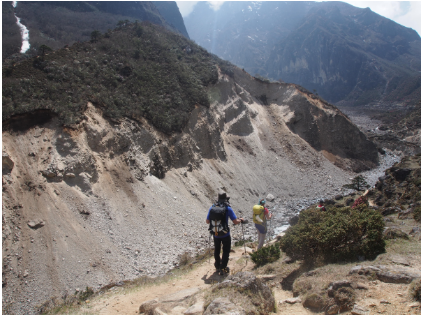 Trekkers en route to Thame to meet with locals and coordinate delivery of roofing materials. Landslides are visible on side of the river.