In the life of a Global Rescue paramedic, it’s a small world after all 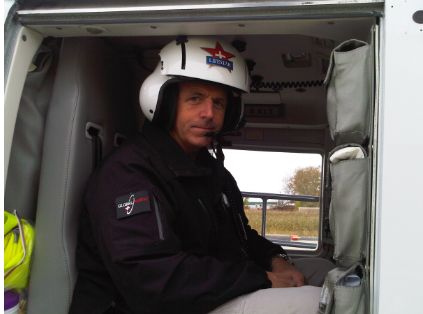 It was about 10 o’clock on a Sunday morning when paramedic Bob Veno received the call that a woman in her 30s had just collapsed outside St. Joseph’s Roman Catholic Church in Kingston, MA. That particular call to 911 stands out against dozens of others a paramedic receives in any given week, because Veno’s wife and children were at the same church at the time.

It was not his wife, it turned out, but someone else’s who had collapsed from heart failure, and Veno brought her back to consciousness. She was airlifted to Boston for a cardiac intervention and lived to tell the tale. But the story between the rescuer and the rescued doesn’t end there.

Six months later, Veno responded to a car accident and a large man in a beard walked up to him. He pointed his finger in the medic’s face, and said, “You!”

“I was scared to death,” recalls Veno, who is not a small man himself.  “Then he said, ‘You saved my wife’s life.’”

When you’ve got 15 years of EMS experience behind you and countless missions as a Global Rescue paramedic, it’s only a matter of time before the people you rescue and their families start surfacing at car accidents, birthday parties, the local supermarket, and even trade shows.

In January, Veno was representing Global Rescue at the Dallas Safari Club annual convention when someone recognized him. It was a man from Mozambique who had called Global Rescue to report that his client had been injured while out in the bush. When Bob introduced himself on the tradeshow floor, the man said, “I thought I recognized that name. You were the guy I spoke to when I called… You know, I really appreciate what you guys do.”

The gratitude that Veno receives regularly from members is the sort of reward that led him to become a firefighter in 1992. Previously he had worked in retail sales and wanted something more out of his career. “I used to think that things like not having an item stocked on the shelf was a life-or-death situation, until I was actually in those situations,” he said.

He later became frustrated when, at emergency scenes, the medics would take over from a firefighter who arrived first, and so he decided to change that. On the day of the Oklahoma City bombings in 1995, Veno took the exam to become a paramedic and passed.

As a Critical Care Paramedic at Global Rescue, Bob has been deployed all over the world.  In the last six months alone, he has deployed to Dubai, the Philippines, Chile, Turkey and Bahrain. When he returned to Boston’s Logan Airport from the Dallas convention, the chief paramedic at the operations center told him not to unpack. He was being deployed to Saudi Arabia immediately.

“When our members need help, we deploy anywhere in the world” said Veno. “We’re always ready.”