Not every Global Rescue member needs an emergency evacuation. Some are confidently pursuing their dreams knowing they have a Global Rescue membership. Take, for example, this unlikely mountaineer from Mumbai who summited Mount Everest in 2021 after beating COVID-19 a few days before summiting. He also completed the trek using only eco-friendly means.

Harshvardhan Joshi may be one of the most talked-about mountaineers to summit Everest in 2021. Google his name and the headlines populate the proof: “25-yr-old conquers Everest, days after recovering from Covid-19,” and “Indian climber Harshvardhan Joshi claims historic ‘green summit’ of Everest.” In the last year alone, he’s delivered 17 motivational speeches, including a recent TEDx Talk about the power of grit. He even has his own Wikipedia page.

So, it’s hard to believe the soft-spoken 26-year-old native of Vasai, India (located on the outskirts of Mumbai), is also the unlikeliest of mountaineers. He’ll be the first to admit it, too. 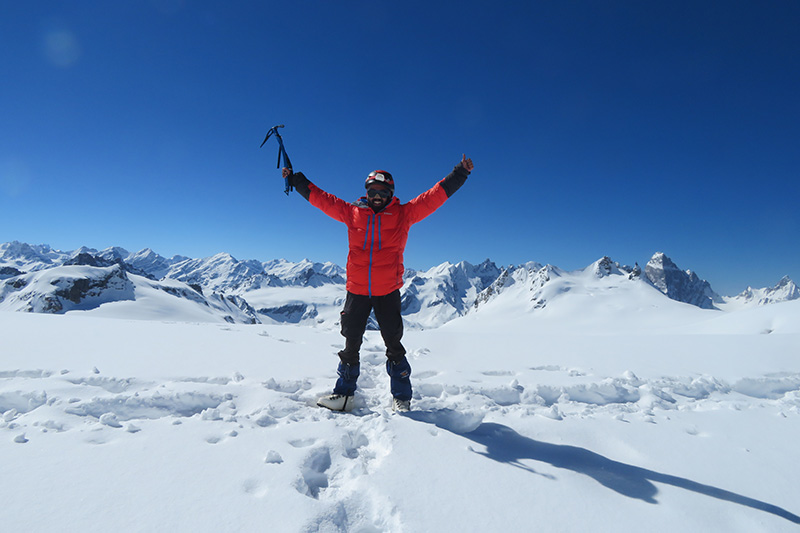 “A lot of people who see me now, especially on social media, think I was always this outdoorsy person,” said Joshi. But, given his humble background in a lower-middle-class family, he was always more concerned with excelling in school in order to secure a solid living. At age 15 — just after he completed 10th grade — he had already started his own business, assembling and selling computers, while pursuing a degree in IT engineering.

“There were a group of doctors who became my clients, then my friends,” said Joshi. “They were also avid trekkers and, one day, took me on a hike to a nearby sanctuary.”

That first visit to the 85-square-kilometer Tungareshwar Wildlife Sanctuary — where he still regularly trains today — was what began his love affair with the outdoors. He started training and learning about wilderness survival and, after borrowing his doctor friends’ gear, completed his first Himalayan trek in 2014. By age 18, he had made it his goal to climb Everest. He wasn’t sure when it would happen; he just knew he couldn’t do it if he went for his MBA in the U.S. like he had originally planned.

“I would rather work toward climbing Everest. I knew it would teach me more about life,” he said. “I realized adventure travel is a much richer and better learning experience.”

He decided, before furthering any career plans, Everest would come first.

Over the next several years — between 2014 and 2019 — he completed nine separate month-long courses in outdoors and mountaineering, developed and committed to a rigorous training regime, honed his skills on other challenging Himalayan mountains and also worked as a mountaineering guide in Ladakh. He began fundraising and set his Everest expedition — which he named Sangharsh Mission Mount Everest (“sangharsh” translating to “challenges” in Sanskrit) — for the 2020 spring climbing season.

Unfortunately, it would be canceled on account of the pandemic.

[Related Reading:
What You Need to Know About the 2022 Climbing Season]

“For two months in lockdown, I couldn’t run or go outside,” said Joshi. “I thought, ‘Oh no, what if I have an existential crisis?’”

What helped was channeling his energy into a different goal: training for, self-organizing and completing his first triathlon. On October 10 — a date he selected because it was World Mental Health Day — he completed the 70.3-mile venture from Palghar within eight hours.

Conquering Everest Despite Another COVID Curveball

Flash-forward to spring of 2021 and Joshi’s Everest expedition was back on. But, on May 8, after a month of patiently waiting at base camp and mere hours of setting off for the summit, he tested positive for COVID-19 (confirmed by two rapid antigen tests).

“I thought ‘I cannot give up right away and go down: I am acclimated to this altitude, Katmandu is in a bad state, I have extra supplemental oxygen,” he said.

Asymptomatic and fully vaccinated, he elected to isolate in his tent for 11 days, reminding those who questioned him that he had Global Rescue, and, if he had even the smallest complication, he wouldn’t hesitate to utilize the emergency rescue.

After 10 days of isolation, he was testing negative and the emergency care unit at base camp that had been monitoring his breathing cleared him to continue his expedition. The weather window came on May 19, and, that night, he and his two high-altitude guides, Furte Sherpa and Anup Rai, set off for the summit.

His original plans were to scale Everest, then Lhotse — which would make him the first Indian to complete that traverse — but the team decided to switch the order since Everest’s neighbor would have fewer climbers. By May 21, he had reached Camp 3. This would have been where he went for Lhotse, but with the weather window closing due to a second cyclone, he had to make the tough decision to scrap Lhotse altogether and simply go for Everest.

[Related Reading:
A Mount Everest Evacuation for “The Cuban Mountaineer]

At 6:40 a.m. the next day, they reached the summit. While the celebration was short — only 15 minutes as the weather was worsening and Joshi was growing more sleep-deprived by the minute — he was grateful for getting his chance and making it.

“We were on a time bomb this year,” he said. “Many good people had to retreat. I’m thankful I didn’t have to.” 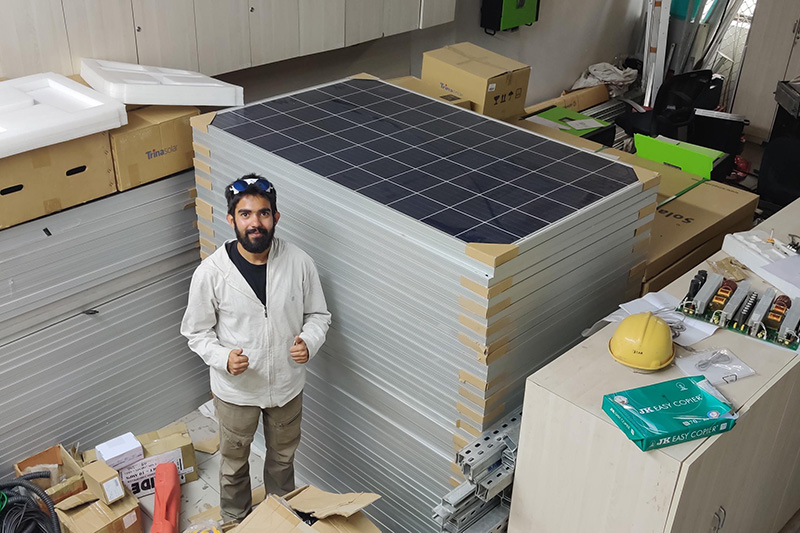 The other feature setting Joshi’s Everest mission apart was the way in which he did it: powered completely by solar energy to bring attention to clean, renewable energy. It’s a cause he can relate to: He’s seen the effects of climate change firsthand during his time in Ladakh, as well as witnessed how many remote villages in the Himalayas lack electricity.

“Without electricity, these people lose at least 12 hours of their life a day. It deprives them of education, health care and communication, keeping them in poverty,” said Joshi.

“Solar, renewable energy can solve problems not just related to climate change but also on a socio-economic front.”

During his Everest expedition, he took three 40-watt solar panels with a battery system to power base camp; a smaller, portable system, which he hoofed up to Camp 2 (6,400 meters/21,000 feet); then, finally, he carried a solar-charged power bank until the final camp in the “death zone” at 8,000 meters.

After he reached the summit, Joshi donated the solar panels used during the expedition to local Nepalese villages that do not have electricity. He was also able to give additional donated panels to power 10 homes in some of the most remote regions of the Himalayas: Turtuk and Ladakh in India, the Makalu region in Nepal and a school in the village of Dharharwa in Bihar.

“The message I want to spread: If we can stay solar for two months in one of the most hostile environments on Earth, imagine where else we can bring this technology and what wonders it can do?”

What’s Next for the Mountaineer from Mumbai

While his Everest expedition is complete, Joshi is hardly resting on his laurels. He’s currently working on a book, studying for the GMAT, spending as much time in his local outdoors as he can and forming plans to move to the U.S., which he calls his next “Everest.” There’s also a documentary about him in the works which should premiere sometime in spring of 2022 (see the trailer here).

Of course, he’s still chasing new mountaineering goals, including promoting mountain climbing among people of color and attempting two more big Himalayan mountains in the fall of 2022 (as for which ones, he is keeping that under wraps for now).

“My long-term goal is to create awareness about safety in the mountains, making adventure sports more accessible and sustainable,” he said. “I’m happy to have come across organizations like Global Rescue who share in that same mission.”