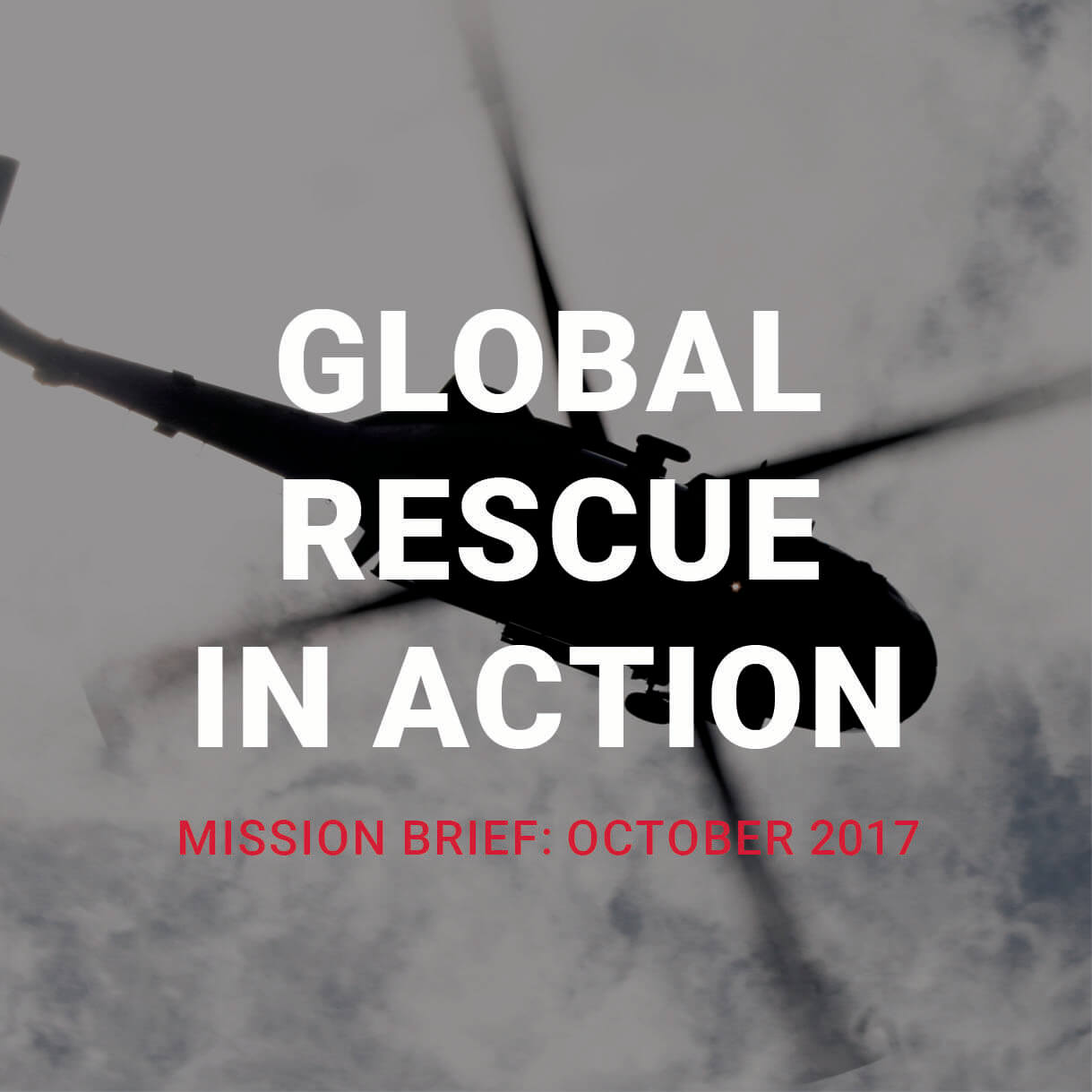 Every day, Global Rescue personnel are involved in medical, security, and travel operations all over the globe. Here is a snapshot of some of our recent activity.

CANADA – Deployed a critical care specialist to accompany a member who suffered a severely broken leg after a horse fell on him while he was traveling in British Columbia. The specialist advised and assisted the member until he returned home to the United States.

ALASKA – Medically evacuated a member who began suffering from severe chest pain while traveling in Alaska. The member’s internal defibrillator activated, and the member had to be evacuated to a nearby hospital for admission. The member was discharged a few days later, but experienced complications, and required further advisory services from Global Rescue doctors.

KENYA – An employee of a Global Rescue nonprofit partner required assistance after she began to suffer severe abdominal pain while in Kenya. Global Rescue personnel advised the employee on treatment options including medication, and provided continued assistance when she continued to experience symptoms after her discharge from a medical facility.

SWITZERLAND – Provided medical evacuation for a competitive skier who suffered lacerations in a training accident when her ski came loose and cut her knee. Global Rescue personnel worked with the team coach and trainer to coordinate her care before flying her back to the United States for treatment.

INDONESIA – Assisted and advised a member who was bitten by a monkey while traveling in Bali. Assistance included advisory on wound care, and facilitating the shipment of rabies vaccination supplies to the member’s destination lodging, where she was able to administer the medication with the help of local medical personnel.

SRI LANKA – Advised and monitored the progress of a member who contracted Dengue fever while traveling in Colombo. Global Rescue doctors analyzed the member’s medical records and blood tests.

NORWAY – Provided a medical escort to the mother of a member who suffered multiple pulmonary emboli while traveling in Bergen. A Global Rescue specialist was dispatched to meet the member’s mother, and supplied her with an oxygen tank for the flight home. Complications ensued, and the specialist remained in Norway with the member’s mother until the member arrived to take over while she recovered enough to continue travel.

ALASKA – Advised the client of a corporate partner who was stricken with a cardiac event while traveling near Dutch Harbor. Global Rescue personnel coordinated with the U.S. Coast Guard to provide a medical evacuation for the client from her ocean vessel to a nearby medical facility via Coast Guard Cutter and helicopter. The client was then taken by ambulance to a major medical facility for treatment.

DENMARK – Advised and assisted a member who was bitten by a tick while traveling in Copenhagen, and was concerned about contracting Lyme disease.

CHINA – Advised and assisted a member who has a history of allergies and began to experience a sore throat exacerbated by altitude sickness.

COLOMBIA – Advised a member who was stung by a large wasp or hornet while traveling in the jungle, and subsequently suffered pain and swelling. Global Rescue vetted a local medical facility, confirming that it would be an appropriate place for the member to seek treatment.

GREENLAND – Assisted a member who was hiking the Greenland Arctic Trail when fellow hikers informed her of a large wildfire. Global Rescue contacted local authorities, who advised that the member should turn around immediately.

UKRAINE – Provided medical advisory services to a member who began suffering rashes while traveling in Kiev. The member was able to furnish Global Rescue doctors with photographs of the rashes, and Global Rescue located a nearby pharmacy where he could obtain remedies to treat the reaction.

SOUTH AFRICA – Provided ground transportation for a member who was stricken with severe back pain while traveling in Cradock, and required ambulance service to a nearby medical facility.

EL SALVADOR – Provided medical evacuation for the mother of a Global Rescue corporate partner’s employee after they employee’s mother suffered a stroke. The mother was taken from her home in El Salvador to Johns Hopkins Hospital in Baltimore.

SWITZERLAND – Provided medical evacuation for a student at one of Global Rescue’s partner schools after she suffered a knee injury while skiing, and arranged for airline travel with wheelchair and baggage assistance on the ground.

NEW ZEALAND – Provided travel assistance and medical advisory to a member of one of Global Rescue’s partner associations after he developed cellulitis in his leg due to two ingrown hairs.

BAHAMAS – Advised a member whose daughter began experiencing serious ear pain while on vacation in Compass Cay. Located a suitable medical facility for the family to visit if the daughter’s condition worsened, and provided analysis from a Global Rescue doctor.

ARGENTINA – Advised and assisted the client of a Global Rescue partner tour operator after the client suffered a broken leg while skiing in Argentina.

TANZANIA – Advised a member whose daughter suffered frostbite on her feet after summiting Mount Kilimanjaro.

SWITZERLAND – Assisted a student at one of our partner schools who had to be hospitalized after she was injured when a snowboarder collided with her on a mountain.

FRANCE – Advised a member and her family after she suffered an arm injury while skiing in Mont-de-Lens. Global Rescue doctors analyzed the member’s X-ray from a local hospital and determined she may require treatment for a small fracture. The member was able to fly home with assistance.

GERMANY – Provided advisory and support to a member and her son after she began experiencing shortness of breath while traveling in Nuremberg, helping her rebook her flight arrangements to come home once she was fit to fly.

MALAWI – Provided advisory services to the employee of a Global Rescue corporate partner who began to suffer from hemorrhoids while traveling in Malawi.

MULTIPLE LOCATIONS – Monitored, advised and assisted members and partners who were affected by the Atlantic hurricane season. This year’s storms brought devastation to the greater Houston area, Puerto Rico, the Florida Keys, and many island locations in the Caribbean. Global Rescue helped stricken and stranded members and their families find shelter and means of evacuation by land, air, and sea, while monitoring the status of the storms in real time.

GHANA – Provided security advisory to a group of students from a Global Rescue partner school that were traveling in Accra and heard from other students that warnings had been issued about a “likely terrorist attack.” Global Rescue personnel helped the students understand the nature of the warnings, which were actually updates to current language and not an escalation in warning level.