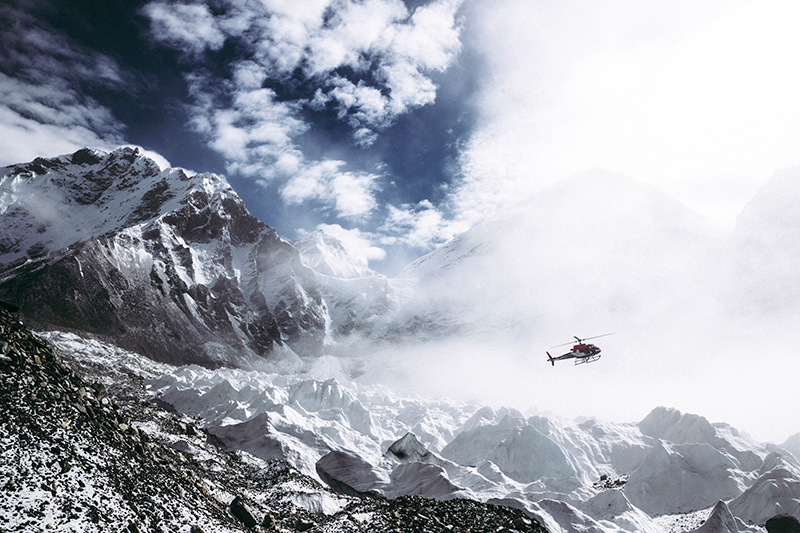 Every day, Global Rescue personnel are involved in medical, security and travel operations worldwide. Here are highlights from some of our May operations in various locations.

Mount Logan is the highest mountain in Canada and the second-highest peak in North America after Denali. At more than 19,500 feet/6,000 meters above sea level, it’s a tough climb. A member from British Columbia was showing symptoms of HAPE for three days. He was unable to descend due to inclement weather and medications did not relieve his symptoms. That’s when his climbing team leader called Global Rescue for help. Due to the challenging terrain, a long-line recovery was needed to rescue the member who was medevaced to a medical facility at the base of the mountain. He was diagnosed with HAPE and advised to continue resting as his descent had improved his condition greatly. The member continued to improve and made his way home.

COVID or a Cold in Denmark?

A Florida member traveling on a ship near Denmark was experiencing congestion, coughs, runny nose, ear ache, headache, pain under her eyes and aching teeth. She took a COVID-19 test and it was negative. She called Global Rescue for a consultation after learning that her insurance company would not be able to help her. Medical operations experts provided her with prescription options for her cough and runny nose as well as options for an in-person physician consultation in Denmark when her cruise ship docked.

[Related Reading: Not All Symptoms Lead to Coronavirus]

Dingboche is a Sherpa village in the Khumbu region of northeastern Nepal in the Chukhung Valley. It rises more than 14,000 feet/4,410 meters above sea level and is a popular stop for trekkers and climbers headed to Mount Everest, Ama Dablam or Imja Tse. Two members, a husband and wife, contacted Global Rescue following four days of isolation due to ongoing illnesses. The wife was experiencing fever, shortness of breath, dry cough, fatigue, loss of appetite and headache. The husband suffered shortness of breath and overall body weakness. She had also tested positive for COVID-19. An airborne rescue was ordered for the pair. They were evacuated to a hospital in Kathmandu where a further test revealed the husband was positive for COVID, too. They were admitted to the hospital and received remdesivir treatment. After a few days, the couple was released from the hospital to continue their treatment and required isolation at their hotel before returning home.

Switzerland is well known for its challenging cycling routes and big climbs. Unfortunately, accidents occur and can cause injuries from road rash to broken bones, and worse. A Global Rescue member from the U.S. suffered an accident while cycling in the Buchs region. He injured his right hand and knee and needed to be hospitalized. He sustained three broken metacarpals and two dislocated joints in his right hand and required a screw and two external fixators to be placed surgically. His injured knee needed surgery and debridement. His treating physicians advised him to return home for further surgical management of his injuries. Following nearly a week of recovery, Global Rescue provided upgraded seating to business class with gate-to-gate wheelchair and luggage assistance due to his injuries. He arrived safely at his home hospital of choice.

A Brazilian member fell on his side near Camp 3 on Mount Everest, and his oxygen tank hit his chest. He was brought down to Camp 2 suffering from chest pain and difficulty breathing. He suspected he may have fractured a rib. Global Rescue was contacted and a helicopter rescue was ordered. He was evacuated to a hospital in Kathmandu where imaging revealed a fracture of the right ninth and tenth ribs. He was treated and later released from the hospital with medications and orders to rest for a few days before his scheduled flight back to his home in Hungary.

A Norwegian member successfully summited Mount Everest but, soon after, developed a cough, snow blindness and frostbite. He complained of eye pain and loss of vision in both eyes. A member of his climbing team contacted Global Rescue and a helicopter evacuation was initiated. The member was transported to a medical facility, where he was evaluated and diagnosed with snow blindness and second-degree frostbite on his left pinky finger. He was prescribed medications for his eyes and affected finger. He was later discharged and advised to follow up with an ophthalmologist at his home to monitor his recovery from snow blindness. He was further advised to inquire about the possible need for hyperbaric treatment for his finger.

A skiing accident in Norway resulted in a serious head injury for a member. He was unconscious after the incident and taken to a nearby hospital where he was diagnosed with a subdural hematoma. The member was sent for a CT scan, given medications and observed overnight in the hospital. He was discharged the next day and given instructions to seek consultation with a neurosurgeon to do a controlled CT scan before his flight home to Boston. Global Rescue medical operations arranged for the member’s mother to travel with him as a non-medical escort to attend to his needs during the long flight. The member and his mother arrived home safely. 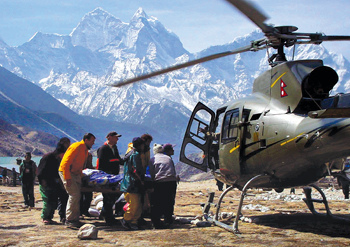 A member from India was found unresponsive in his camp tent on Kangchenjunga, the third highest mountain in the world. He was given oxygen and carried by two Sherpas to Camp 2 where he regained consciousness and remained on oxygen with symptoms of Acute Mountain Sickness (AMS). Further descent with his Sherpa’s assistance was ruled out since the route is quite technical and the member was too weak to walk. Global Rescue was contacted and a medical evacuation by helicopter was ordered. The member was rescued and taken to a hospital in Kathmandu where he was treated for AMS. Following sufficient recovery, he was discharged and advised to rest further before returning home.

A member from Budapest was experiencing vision problems while descending to Mount Everest Camp 2. A Sherpa contacted Global Rescue and a helicopter medical evacuation was arranged due to the inability of the member to descend any further safely. The member was transported to a hospital in Kathmandu, where he was assessed, treated and discharged with a diagnosis of snow blindness.

A Global Rescue member from the U.S. was suffering from shortness of breath, severe dehydration, an inability to speak, general body weakness and dizziness as he approached Mount Everest Camp 3 (23,950 feet/7,300 meters). When he arrived, he collapsed and was unable to walk. The expedition leader reported seven Sherpa guides were required to assist the member to Camp 3, where he was unable to move. It was clear that continued descent was unsafe due to the nature of the terrain and the depleted physical condition of the guides. The expedition leader contacted Global Rescue and a long-line helicopter rescue was initiated. The member was successfully evacuated and transported to a medical facility in Pheriche for initial treatment and then transported to a hospital in Kathmandu. The member was diagnosed with Acute Mountain Sickness, treated and discharged following his recovery.