At Global Rescue, one of the best parts of our work is getting to know our inspiring members. Many go to the ends of the earth, to its highest peaks and greatest depths to feed their insatiable hunger for adventure.

The following female trio, a mother, a veteran and a missionary, epitomize the growing force of how women travel, which is especially important since women are the fastest-rising demographic in the travel industry. “Consider tourism and travel, where experts agree that women are fueling an explosive growth, making 80% of decisions and expected to spend more than $125 billion this year,” according to Forbes.

Dianette Wells was 16 years old when she first saw Mount Whitney. She was driving north from Los Angeles on California’s scenic Highway 395 and looked to the left. There it was: California’s highest peak.

“I was immediately drawn to it,” she said.

Seventeen years later, she climbed the mountain for the first time. And it changed her life forever.

That was 1998. Since then, she has been unstoppable: summiting Mount Whitney 10 times, the Grand Tetons four times, reaching the peaks of the Seven Summits of the world, including seven climbs of Mount Kilimanjaro. She has completed several adventure races and international ultramarathons.

This practice of adventure sports helped her through one of the hardest periods of her life: the death of her 23-year-old son Johnny who was wingsuiting in Switzerland.

Wells is 56 years old and still scaling mountains and making a difference in the world along the way. Every time she summits, she takes a picture of Johnny’s name, which is tattooed on her wrist. She often holds up the same signs he held when he summited mountains, to raise awareness around issues like Parkinson’s disease.

She relied on Global Rescue services after contracting a serious infection in Fiji that required medical evacuation to New Zealand for treatment during her hospitalization before returning home to the U.S. You can read her harrowing story here. <can we do the video instead?>

When it comes to women’s adventure travel, Amanda Burrill forges new paths. When she gets above a tree line, emotion overcomes her. The peace, the beauty, the solitude. 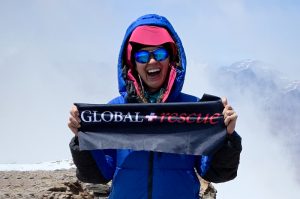 “I am more free than ever at that moment,” she said. “It’s the only place I have an escape from the things in the world that burden my mind and exhaust me.”

Burrill lives every day in the aftermath of two traumatic brain injuries—the first sustained while serving with the military in Iraq, the second after losing her balance and falling down a flight of stairs, across a landing and into a wall.

Outwardly, it’s hard to tell she is struggling at all. She’s a passionate adventure climber, chef and journalist. But inwardly, she has been on a nearly 20-year journey to diagnose and understand how her injuries have impacted her brain and her everyday life.

For Burrill, new experiences have become the path toward healing her brain, and she relies on Global Rescue the whole way to come to her aid if necessary.

“Though I haven’t had to use them yet, there have been many times I’ve been extremely grateful to know that Global Rescue is there,” she said.

Cassidy Cann’s life is quite different from the “American Dream.” She’s given it up for something she believes is greater and more rewarding.

In 2014 she and her husband, Zach, moved from Phoenix, Arizona, to a remote, jungle village in Papua New Guinea with their two young boys.

Cann and her husband spent two years preparing for their move to Papua New Guinea. Preparation was rigorous and meant learning a foreign language, studying cross-cultural living and learning Greek and Hebrew languages to help them better understand, and teach, the texts of their Christian faith.

When they left their home, Cann knew that they would be trading the comforts of life in America for what she calls a “difficult but beautiful” life in Papua New Guinea. Her experience there over the past eight years has proven this to be true over and over again.

“It’s humbling because we get to see the impact we’re having on the people in the village,” she said. “Those who are born here have little access to education, especially the women. In our time since moving here, we have created a literacy program to teach any willing person to read and write in their local dialect.”

Having a membership with Global Rescue has not just given them peace of mind while living in a remote location, but became a great help to them when their son broke his jaw <video as well?> after a bicycle accident.

“We felt inadequate to handle it on our own,” Cann said. “It was a comfort to have Global Rescue handle all the logistics of getting us to a safe place.”

The perfect gift for the intrepid female traveler

Are the women in your life also inspiring, intrepid travelers? Consider giving your mother, sister, wife, daughter or friend a membership with Global Rescue this holiday season. 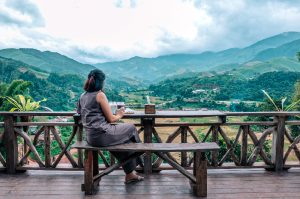 “Global rescue is embedded in our travel,” Wells said. “I think people are taking a huge risk without it. You could be shopping in Spain and trip and fall and hurt yourself. If you don’t have Global Rescue, getting home is just abhorrently expensive.”