“When we were hit by windshear, I knew the plane was going to crash”– Global Rescue member Eric Lundahl’s story

Global Rescue member Eric Lundahl, the owner of a sport fishing company, travels between Northern California and Baja Mexico monthly, often piloting his own Cessna 182.  Recently retired, the 61-year-old Lundahl became more heavily involved in his La Paz-based business. “I knew I would be traveling monthly, back and forth, for the next three to five years.  I decided it would be good if I had some sort of emergency coverage.”

Lundahl, a life-long pilot, purchased a Global Rescue membership in January 2014 as a precaution.  “Traveling these distances through Baja can have its challenges and dangers,” he said. “I had no idea I would need Global Rescue so soon!”

Lundahl left La Paz one morning in early November 2014, heading for his first stop near the U.S – Mexico border. But this was not to be a typical flight. “The winds were up pretty good, blowing 29 knots from the north,” he recalled. The heavy winds slowed his travel and made it necessary for an unscheduled landing in San Felipe, Mexico, for fuel. Upon final approach, he experienced windshear, which was “like the hand of God pulling the airplane into the ground.”

The airplane hit the ground 50 yards short of the runway, skidded on to the runway, and came to rest.  Both Lundahl and the copilot were knocked out at the time of the landing. “Fortunately, we didn’t roll the airplane over,” he recalled. 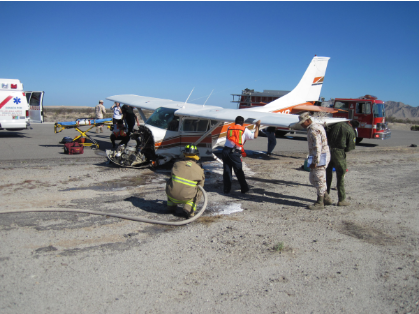 All four people on board were able to get free of the wreckage. Lundahl and his copilot had serious injuries which would require transport to a U.S. trauma center.

“My copilot was hurt fairly bad, and he was still unconscious,” said Lundahl. “I didn’t think I had any broken bones so I was able to get out of the airplane. I was loaded into a fire truck that arrived on the runway and was taken to the local clinic, where services were very limited. I mentioned that I carry Global Rescue, which is exactly for this kind of emergency. I called Global Rescue and explained what had happened. That’s where Global Rescue stepped in and saved me,” Lundahl said.

The Global Rescue operations team sprang into action.  “Every 30 minutes, I had a call from Global Rescue. They would call just to check on me, make sure that I was conscious, aware and being cared for, which was very good. Not long after, a very clean ambulance with an English/Spanish speaking doctor and a paramedic arrived, all arranged by Global Rescue.”

Lundahl was transported by ambulance to the border. “The crossing of the border into the United States can be horrendous – a couple of hours – in an automobile. For us, it was seamless. The Customs people knew who I was. They even knew that I had Global Rescue coverage.”

Once in the U.S., Lundahl was transported by helicopter to a San Diego trauma center.

“I got to my room and Global Rescue called to check that I was in my room and was well taken care of.  The next morning, I was pretty surprised when a young man walked into my room and said, ‘Hi, I’m your Global Rescue paramedic.’ He was there to oversee my medical care and to make sure I got home safely.  That was over and above what I expected. I did not expect that level of service.”

Lundahl underwent a battery of tests and remained in the trauma center for a couple of days.  “I don’t care much for hospitals and was itching to get out of there.  Global Rescue’s paramedic was very good about calming me down and making sure I got the proper care.”

Lundahl’s injuries were mostly facial, including a cut which severed all the nerves from the right side of his face. A few teeth were missing and he suffered a fractured bone in his jaw. Global Rescue’s paramedic remained with him until he was discharged and well enough to travel home.

Lundahl is on the road to recovery. “I am doing quite well, though still a little sore. I apparently crushed my right hand too. My face is still a little numb, but I’m coming back.  Not bad at all.”

Lundahl is thankful he made the decision to purchase Global Rescue.  “For 329 dollars a year for an individual medical membership, it’s very reasonable for the kind of coverage Global Rescue offers, so I decided to purchase it. I didn’t think I’d need it quite as soon as I did. Boy, am I glad I bought Global Rescue.”

Based on his experience with Global Rescue, Lundahl is spreading the word. “My sport fishing business handles more than 1,000 clients a year who travel in and out of Mexico.  We’d like to make sure that all of our clients are aware that Global Rescue offers this type of coverage. I also give several talks to flying clubs every year. You can be sure that I will bring up a few photographs of the crash and tell them, ‘Global Rescue is how you handle it.’”

Lundahl concluded:  “Global Rescue’s service was superb. I would recommend no other.” 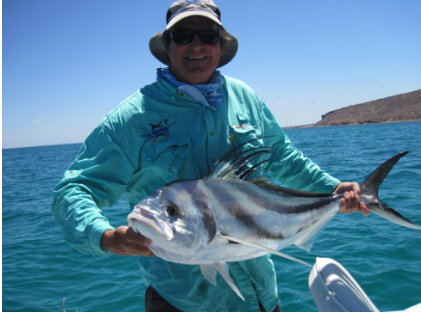