Cross Country Paragliding: What Is It and Is It Safe? 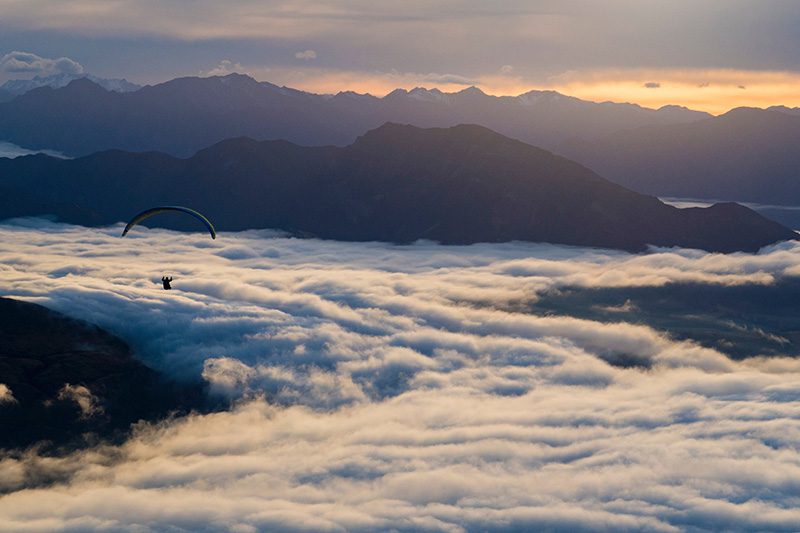 This post is part of the Global Rescue “No Restrictions” series, where we take a look at extreme sports and activities that many of our members have taken part in — or plan to. Unlike other providers, Global Rescue memberships do not exclude or restrict adventure activities, whether cave diving, sky diving, heli-skiing, BASE jumping and beyond.

Gavin McClurg, a Global Rescue member, has racked up plenty of paragliding firsts.

In 2014, he completed the first paragliding traverse of the Canadian Rockies, the longest series of connected flights currently ever flown at 1,200 kilometers (745 miles) over 18 days. In 2015, he was the first American to ever complete the Red Bull X-Alps competition, a 1,000-kilometer (620-mile) paragliding/foot race across the Alps. In 2016, he became the first person to traverse the full length of the Alaskan Range over 37 days, completing the last third of the 700-kilometer (430-mile) route entirely solo. And, until recently being usurped in 2020, he had previously held North America’s foot-launch distance record (387 kilometers/240 miles) since 2013.

So, it’s hard to believe that, after taking his first few tandem paragliding flights back in 2004, McClurg, admittedly, wasn’t very impressed with the free-flying sport.

“I thought it was kind of boring,” laughs the 49-year-old from Ketchum, Idaho, and all-around adventure athlete who has kayaked first descents across Central America and sailed around the world — twice.

“But once I got to take control myself and learned I could fly these really long distances through deep valleys and over major mountains and land somewhere I had no idea where that would be, I was addicted. It’s spectacular, scary and sublime all at the same time — the ultimate freedom and greatest adventure.”

Welcome to the wild world of cross country paragliding, a sport that combines elite paragliding and backpacking skills to travel great distances in some of the most beautiful — but sometimes, unforgiving and unpredictable — destinations.

The Essential Equipment for Any Type of Paragliding 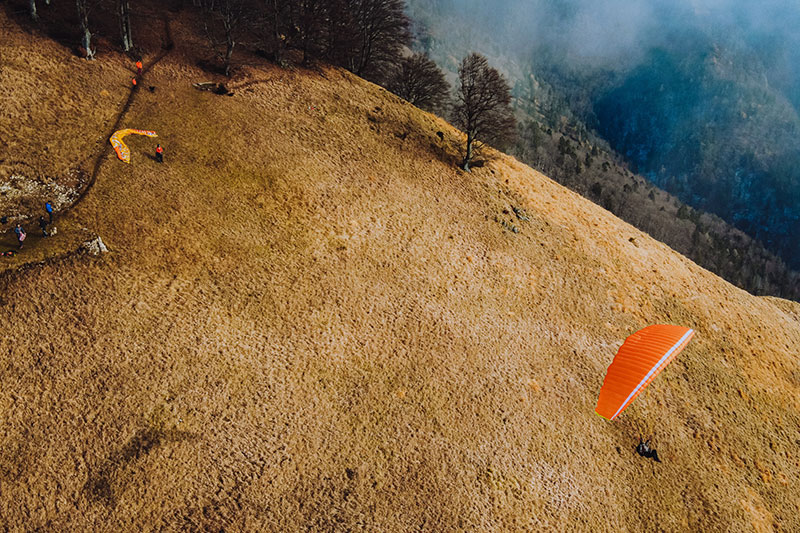 There is no engine associated with paragliding, which, to the uninitiated, can seem hard to believe given the speeds at which paragliders can climb (up to 2,000 feet per minute) and glide and distances (up to 50 miles an hour) that can be achieved. Foot-launched by the pilot from a hillside, the aircraft consists of core elements:

The Differences in the Cross Country Paragliding Discipline 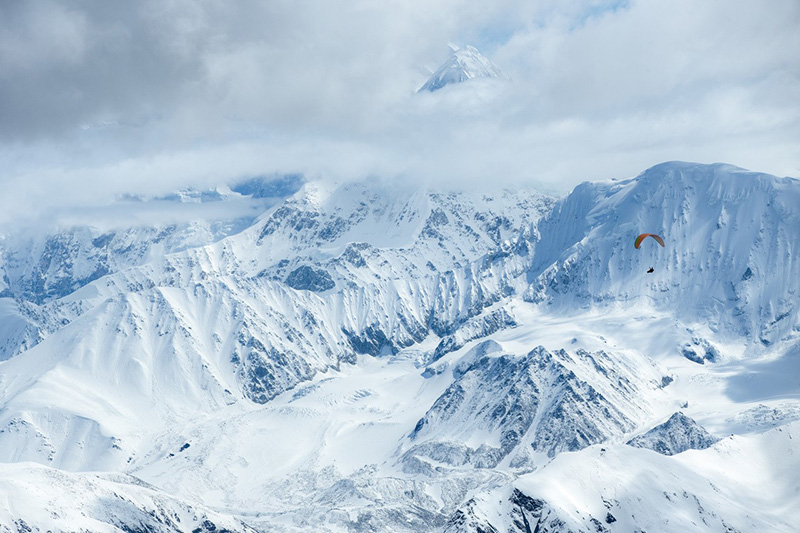 Gavin McClurg was the first person to traverse the full length of the Alaskan Range. It took more than 37 days. Photo courtesy of Gavin McClurg / © Jody MacDonald

While there are different types of paragliding, including hill soaring (using ridge lift and thermals to fly hills), high-wind soaring (flying dune winds on the coast of countries like Denmark, the Netherlands, Portugal and France) and freestyle and acrobatic (a stunt-filled variation), there are a few essential skill sets that separate long-distance paragliding from the rest: 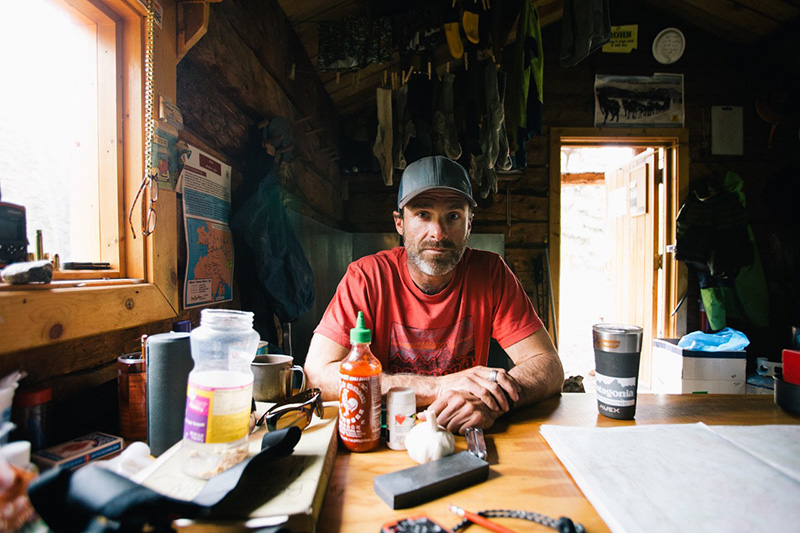 “I’ve been able to see some wild destinations in the world that, on foot, would be impossible to access,” says McClurg. “I’ve been to places I’m not sure another pilot will ever pass through again. There’s something special about that.”

But as exciting and rare as drifting above these destinations may be, it also comes with its fair share of risks.

“When you go into these really deep places, there are few places to put a glider down. You’re basically breaking all the rules of paragliding, like never fly over a place, if you don’t have a landing option, but in cross country, that’s not going to happen. We have to fly over a lot of terrain where we can’t land.”

And he’s had close calls, too, like landing in a river in the Dominican Republic and walking out over a series of massive waterfalls, hitting the ground too hard and banging up his mouth in the Canadian Rockies, and getting caught in a gust front in the Wallis of Switzerland. 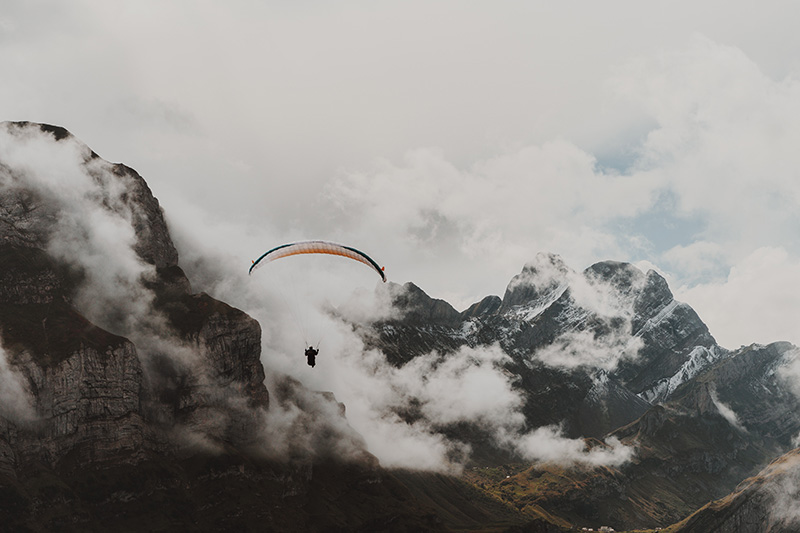 Want to take a tandem flight? Or simply watch the pros while you stay safely securely to the ground below? Here are a handful of cross country paragliding destinations around the world.

Whether you’re cave diving, BASE jumping, heli-skiing, skydiving, free diving or more, remember to plan, prepare and get a Global Rescue membership for peace of mind. Unlike other providers, Global Rescue memberships do not exclude or restrict adventure activities. It’s part of our “No Restrictions” approach to travel — and that includes COVID-19, too.