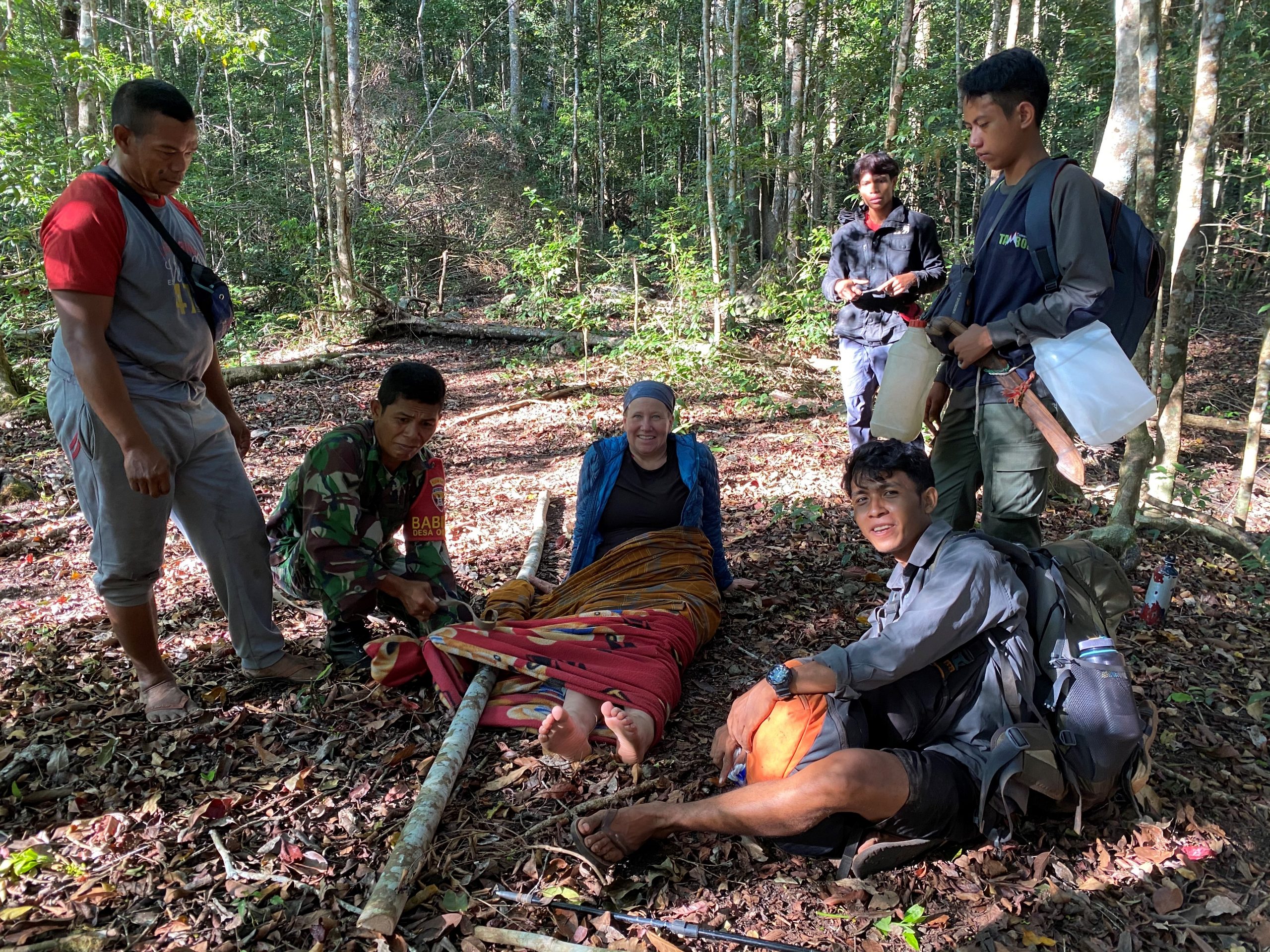 Cheryl Gilbert was trekking the world’s deadliest volcano in a remote part of Indonesia and accidentally broke her leg during the descent. “I came down on the foot and I heard it crack,” she said. Read her travel story.

If you’re a history enthusiast and love hiking, like Cheryl Gilbert, then exploring places where you can combine your two passions is ideal. But when she was trekking the world’s deadliest volcano in a remote part of Indonesia and accidentally broke her leg during the descent there was no substitute for the peace of mind that came with knowing she had the protection needed for an emergency rescue.

Gilbert, a 52-year-old senior executive for a major international retailer, was on a leisure trip on the Indonesian island, West Nusa Tenggara. She spent time snorkeling with whale sharks before embarking on a multi-day hike to the top of Mt. Tambora (2,850 meters/9,350 feet), an active stratovolcano.

“It’s the deadliest volcano in modern history,” Gilbert said, referring to the Tambora eruption in 1815. The volcanic blast killed tens of thousands of people, shot a flume of ash, rock and debris 20 miles into the stratosphere, and lost a third of its height. The resulting ash cloud caused climate anomalies in North America and Europe that led to crop failures, resulting in the worst famine of the century.

Since then Mt. Tambora has been quiet. The area is now a national park and features two main routes to the caldera, the hole at the top of the mountain formed by the inward collapse of a volcano. “The only thing challenging about the route is that it is quite remote. A group of us went with a guide on one of the official trails. I was on my way down when I fell,” she said.

Gilbert is a veteran trekker and has hiked the Great Wall of China, rambled in Mongolia, and is currently exploring Indonesia.

Her passion for treks and hikes started two decades earlier when she was living in the Netherlands and had an opportunity to take a work-sponsored sabbatical.

“That’s when I decided I’d walk to Spain. I picked up gear, put a tent in my pack, and left. I hiked the 500-mile ancient pilgrimage route from Holland to the west of Spain. After that it became a lifelong fixation. I hike and trek whenever I can,” she said.

In all that time, over all those miles, she never had an injury or accident on a trek, until recently.

I Heard My Foot Crack

Gilbert was her way down an extremely steep section of the Mt. Tambora route when she put her foot into a hole for extra stability. Unfortunately, the hole was filled with leaves and much deeper than it looked and she slipped with one foot trapped in the void.

“I came down on the foot and I heard it crack,” she said.

Relying on her knowledge, and the experience of other trekkers, Gilbert removed her shoe and saw the damage to her ankle. “I resolved that I wasn’t going to try to stand, put weight on it, or attempt to walk out of fear that I’d do more damage,” she said.

She and the group needed to keep moving but the steep hill prevented members of the group from safely carrying her. “I managed to crab walk myself down about a kilometer using my arms and one leg with the injured leg elevated and out of the way,” she said.

When everyone reached an area to bivouac, Gilbert recorded a message on her phone and handed it off to her hiking partner, who scooted further down the hill where he could get a signal. “He called Global Rescue, played my recorded message, and started the rescue process,” she said.

The dense tree cover made a helicopter rescue unrealistic. Thankfully the weather was not a threat but nightfall was looming, making the trails too dangerous to descend until morning. Gilbert settled in and waited.

“It was oddly beautiful, laying back and watching the monkeys play in the trees and the birds swooping in the air. I wasn’t in any pain. I must have been in shock,” she said.

[Related Reading: When Your Back Bails on a Hike]

The porters were very supportive and helpful. They set up a tent for her and supplemental food supplies were provided. The next morning, the rescue team arrived.

“They came with bamboo poles and sarongs (looped scarves) to create a mobile hammock to carry me five kilometers to base camp where an ambulance was waiting to take me to a medical facility,” she said.

Ultimately Gilbert needed to go to a hospital in Jakarta – the other side of the county from where she was. “A lot of people don’t realize that Indonesia is as wide as the United States and includes more than 17,000 islands – many of which are extremely remote and only accessible by propeller plane – like the one I was on,” she said.

Gilbert was assisted by a Global Rescue-provided nurse during her transports to a Jakarta-based hospital. “The nurse made all the difference. To have someone with me who was Indonesian and could negotiate with people and deal with all the medical stuff,” she said.

It all went well and Gilbert arrived in Jakarta where she received additional medical attention before being discharged.

A week into her recovery, Gilbert reflected on the experience, and the need for travel crisis protection services. “I’m adamant that you always need a way out, especially if you’re going to be in place where there isn’t a good health care infrastructure. I get angry when I go on trips and I discover the someone hasn’t taken the precaution because then the burden falls on everybody else,” she said.

Gilbert discovered Global Rescue while planning a trip to Pakistan where rescue resources are limited. That’s when she started asking questions. “Talking to other trekkers and climbers confirmed for me that Global Rescue would come and get you in an emergency. I know a lot of climbers and they all told me that the one company that will come get you is Global Rescue. I enrolled for my trip to Pakistan and I’ve kept my membership ever since. I hadn’t needed it until now.”