Snakebites – Who Gets Bitten and Who Dies 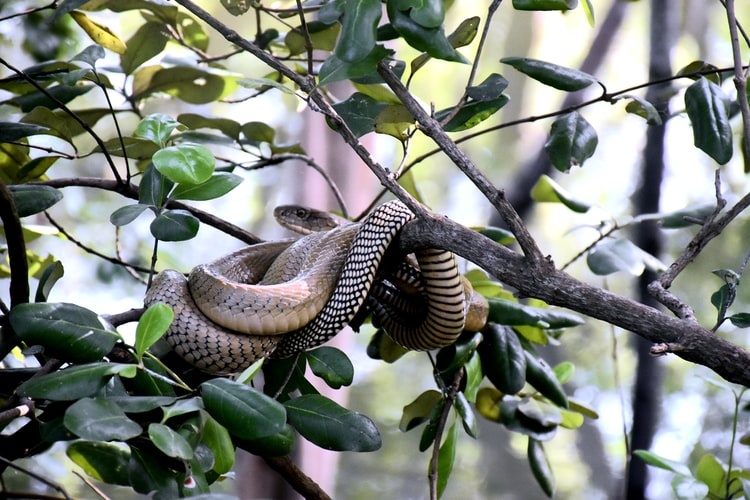 Many people dread snakes – so much so that they actually avoid going outdoors to fish, hunt, hike, or picnic. Others out of a misplaced fear, will kill every snake they see.

As an outdoor enthusiast, it’s really only a matter of time before you will encounter a snake in the backcountry. Contrary to popular belief, snakes are not in the business of looking for people to bite.

Despite their sinister reputation, snakes are more afraid of you than you are of them. Most snakes do not act aggressively toward humans without provocation. Although many harmless snakes will bite to defend themselves, usually their bite produces nothing more than simple scratches.

With Global Rescue’s snake safety tips, you’ll be able to enjoy the outdoors and avoid direct encounters with snakes.

Snakes are reptiles and like their relatives, lizards and crocodiles, they are legless, covered with scales, cold-blooded, can swim and have been around for millions of years.

All snakes eat other animals, while some snakes even eat other snakes. Snakes, even venomous ones, are important to the environment and help to control populations of rodents and other pests.

Only about 400 of 3,000 snake species worldwide are poisonous. These venomous snakes are most prevalent in temperate and tropical climates, with April-October being peak snakebite season. About 25 species of poisonous snakes are found in North America.

The Likelihood of Dying from a Snakebite

Though the exact number of snake bites is unknown, an estimated 5.4 million people are bitten each year with up to 2.7 million envenomations, according to the World Health Organization. Between 81,000 to 138,000 people die each year from snake bites, and around three times as many amputations and other permanent disabilities are caused by snakebites annually.

One in 37,500 people are bitten by venomous snakes in the U.S. each year. The chances of dying from a venomous snakebite in the United States are nearly zero, because of the high-quality medical care in the U.S.

The risk of dying from a venomous bite increases when multiple bites are involved and when the bite occurs in the young, old or among individuals with underlying respiratory or cardiovascular problems.

By contrast, a snake bite is the leading medical emergency in the Asia-Pacific, resulting in 46,000 deaths each year. Poor, rural areas that lack appropriate medical care and the correct antivenom contribute to this high number of snakebite fatalities.

Who Gets Bitten By Snakes?

In the United States, a significant number of people who are bitten by a snake are the ones who handle or attack snakes.

The majority of poisonous snakes in the U.S. are pit vipers. Rattlesnakes, copperheads and cottonmouth (water moccasin) snakes are in this family.

Typically, snake bite victims tend to be young males, between 11 and 19 years old, who are bitten on the hand while trying to pick up the snake.

People attempting to take a “selfie” with the snake are at high risk of being bitten. Dead snakes, even several hours later, can reflexively bite, causing either a second bite or biting another member of the group.

The Centers for Disease Control and Prevention offers a list of signs and symptoms, which include:

According to Medical News Today, a venomous snake bite will usually leave two clear puncture marks. In contrast, a nonvenomous bite tends to leave two rows of teeth marks. It can be difficult to tell, especially if the site swells immediately, so seek medical attention for any snake bite.

What to Do If a Snake Bites You?

Field management for snakebites should focus on limiting the systemic spread of the venom and rapid evacuation of the victim to a medical facility equipped to handle envenomations. While waiting for evacuation, do the following:

For those with advanced medical training or wilderness emergency medicine training, monitor vital signs, ensure airway is unobstructed, and be prepared to treat victim for anaphylaxis, nausea, vomiting and pain.

How to Treat a Snake Bite

According to John Hopkins Medine, at the emergency department you may be given:

As with any deep puncture to the skin, infection is a concern. The wound should be irrigated and cleaned at a hospital emergency department or emergency health clinic.

The person who is bitten by a snake may need a tetanus shot. Tetanus boosters should be given every 10 years.

Take Global Rescue with You

Wherever you travel, study your destination ahead of time. This may include researching the native flora and fauna that might be harmful.

If you plan on exploring off the road and into the tall grass, take a travel protection membership with you. Global Rescue memberships include personalized advisory services, 24/7/365 emergency assistance and evacuation services from the point of illness or injury. To learn more about membership benefits, click here.